2023: Enyinnaya Abaribe advises Nigerians to be wary of fake promises 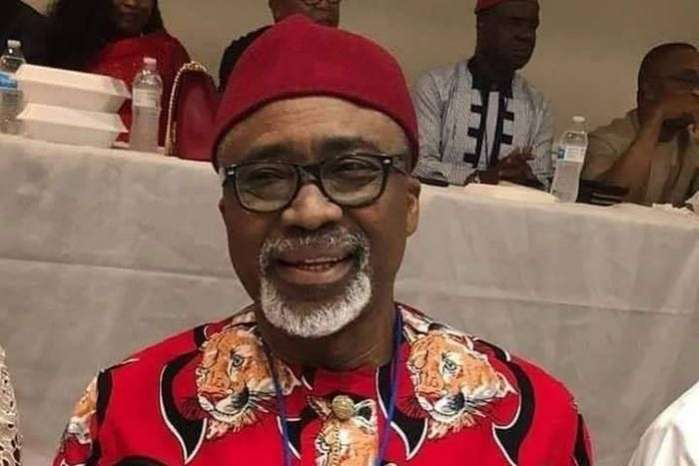 The former minority leader of the senate, Eyinnaya Abaribe, has advised Nigerians to be wary of “fake promises” by politicians in the build-up to the 2023 elections.
He also aimed a critical comment at the All Progressives Congress (APC), over the presence of “unknown” clerics at the ceremony to unveil Kashim Shettima as the party’s vice-presidential candidate.
Shettima was unveiled as the running mate to Bola Tinubu, APC presidential candidate, on Wednesday.
At the ceremony, several persons were seen clothed in clerical outfits, but the Christian Association of Nigeria (CAN) had said they were not their members.
Speaking on Friday at the investiture of Max Amuchie, founder of Sundiate Post, as the sixth president of the Rotary Club of Abuja central business district, Abaribe, who was chairman of the occasion, said as the general election approaches, Nigerians must demand accountability from leaders.
“As we get involved in the processes leading to the 2023 general elections, we must look out for the truth and must be able to extract it from the prospective leaders which must serve as an instrument to hold government accountable to the people,” NAN quoted him as saying.
“Let us be wary of fake promises made on the spur of the moment, now that we are having UGM (unknown god’s men) otherwise known as Agbado bishops.”
He added that for active participation in the 2023 elections, Nigerians could adopt the four-way test of the Rotary Club — “Is it the Truth? Is it fair to all concerned? Will it build goodwill and better friendships? And will it be beneficial to all concerned?”.
“The four-way test I know you will say is only for the discerning mind, yet it is a truism. The four-way test is as constant as ever and can be applied to all aspects of life. In this case we can apply it to our politics,” he added.
“2023 is another transition year election. People are expectant, with trepidation though. There is anxiety and creeping doubt. That is why we must be ready to interrogate the actions of the major gladiators and the current players using the four-way test as a guide.
“The last election in Osun has shown that candidates matter and not parties; performance and antecedents; not ethnicity or religion will be the determining factors of the 2023 elections.”
At the event, which also featured an award ceremony, Abaribe was the recipient of the ‘Economic Development and Empowerment’ award by the Rotary.
In his acceptance speech, Amuchie, the new president of the Abuja CBD, said his focus would be on supporting the underprivileged.
“I have never regretted being a Rotarian. It is an association that welcomes everybody; one’s social status does not count when it comes to membership,” he added.
Chima Ugo is a patriotic Nigerian, a journalist, blogger and singer who is so much interested in the internet, journalism, and blogging and have been for half a decade.