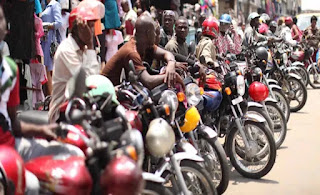 The Amalgamated Commercial Tricycle and Motorcycle Owners, Repairs, and Riders Association of Nigeria (ACOMORAN) has advised the Federal Government to abandon the idea of nationwide motorcycle bans as counter-productive.

According to the Association, an outright ban could force over 40 million Nigerians who make a living from motorcycles into an already overcrowded labour market.

It also warned of the economic and security implications, saying that, in addition to impoverishing millions of Nigerians, it would exacerbate the anti-social vices that the government was attempting to contain.

Alhaji Samsudeen Adebayo Apelogun, National President of ACOMORAN, issued the warning on Monday at a press conference in Abuja, noting that their membership base stands at 12 million nationwide, with 6000 adequately registered.

Remember that, following its security council meeting on July 21st, 2022, the Federal Government indicated that it might be forced to prohibit the use of motorcycles and mining activities because it had been discovered to be a major means of movement for bandits and a source of amassing ransom from kidnap victims.

However, the leadership of ACOMORAN opposed the move, claiming that the government lacked effective security architecture and thus should overhaul their intelligence gathering mechanism rather than creating another monster that would ultimately add salt to the injury.

"Commuters see motorcycles as a solution to their transportation problems, while motorcycle riders see their adventure as a source of livelihood," Apelogun explained. Without a doubt, the use of motorcycles has increased mobility for middle-income earners, which has contributed to an increase in production via an increase in man hours.

"Let me state unequivocally that, in my experience, 95 percent of those seen riding motorcycles are doing so because they don't have better options and don't want to turn to crime."

"Can the government keep ten million of the 40 million people they intend to make unemployed from turning to crime?" If you attribute terrorist movement to motorcycles, don't criminals also use vehicles? Was it the motorcycle riders who caused the failure of intelligence gathering when terrorists attacked Kuje prison?"