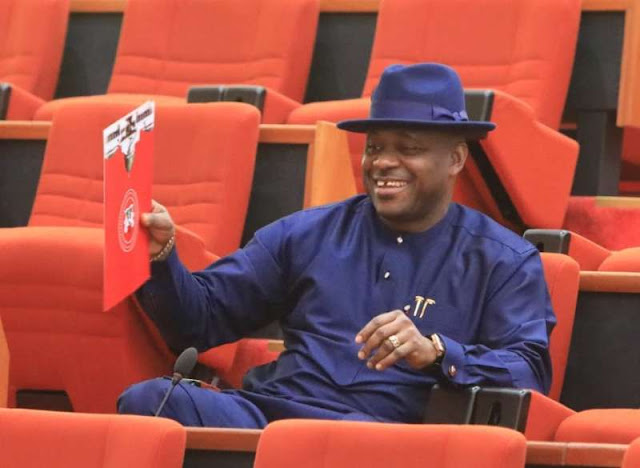 A governorship aspirant of the Peoples Democratic Party (PDP) in Akwa Ibom State, Bassey Albert, has dumped the party.

Albert, who is the senator representing Akwa Ibom North-East District, disclosed this in a letter to his Ward Chairman in Ibiono Ibom Local Government Area dated July 15.

Akpan said his resignation is to enable him to contest in the state’s 2023 gubernatorial election.

Although Albert did not disclose the platform which he intends to actualise his ambition, it is widely speculated that he will join the Young Progressive Party.

Albert’s resignation letter surfaced on various WhatsApp groups immediately after his supporters lost a case at the Federal High Court, Abuja, challenging the ad-hoc delegates’ election conducted by the PDP in Akwa Ibom.

Some PDP members in the state, mainly Albert’s supporters, had challenged the conduct of an ad hoc delegates election held on April 30, which they said contravened the party’s constitution.

While the Federal High Court in Abuja directed parties in the suit to “maintain status quo antebellum” pending hearing and determination of the suit, the PDP conducted its primaries in the state.

But Albert refused to take part in the primary, citing the order of the court.

The Judge, Obiora Egwuatu, on Friday, ruled that the plaintiffs, having not participated in the delegates’ election, lacked the locus standi to institute the suit.

The court held that the suit lacked merit.
Chima Ugo is a patriotic Nigerian, a journalist, blogger and singer who is so much interested in the internet, journalism, and blogging and have been for half a decade.