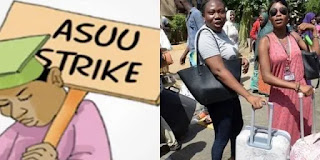 The Academic Staff Union of Universities (ASUU), University of Nigeria Nsukka (UNN), has pleaded with the public to ignore a recent viral video made by a Nollywood actor criticizing UNN-ASUU.

This is stated in a statement released in Nsukka on Wednesday and signed by the chairman and secretary of ASUU-UNN, respectively, Comrade Christian Opata and Comrade Michael Nwokedi.

The union's attention had been attracted, according to the statement, to a recent viral video that hailed a UNN graduate and Nollywood actor named Mr. Williams Uchemba.

In it, Uchemba stated that UNN academics were pleading with him for help because the ongoing ASUU nationwide strike had made it impossible for them to provide for their families, including themselves.

"The leadership of ASUU-UNN has been made aware of a film attributed to Uchemba, in which it is claimed that academics are asking for donations from the public through him in order to feed themselves and their families.

The statement read: "The union is not aware of any such plea as ASUU-UNN has a welfare system for minimizing the impact of the prolonged strike for members.

According to the statement, the video's maker said that requests from academics in the field led to the assistance.

Uchemba, however, apologized after speaking with the branch's leadership and went on to post a formal apology on social media.

"UNN-ASUU has a welfare program to lessen the impact of our members' salaries being delayed, and the majority of members who requested for assistance under the program received money.

The statement said, "This assistance for our members is not limited to food alone but payment of health bills, children's school tuition, house rent, among others.

However, the statement raised concern that President Muhammadu Buhari's recent ill-informed ultimatum to ASUU of "enough is enough" coincided with Uchemba's viral video.

The message continued, "We fear that this may be one of the government's tricks to break the ranks of ASUU.

In the meantime, attempts to gain a response from Uchemba were fruitless since, as of the time this report was filed, neither calls nor texts sent to his cellphone received a response.