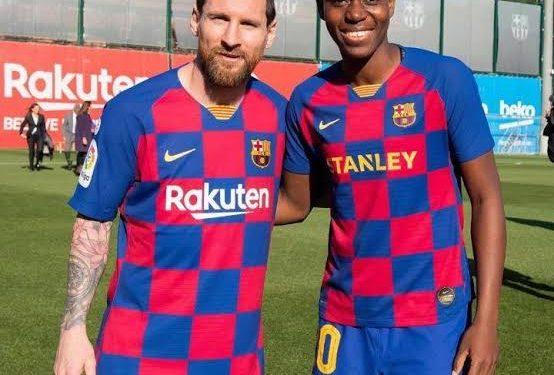 Last season, the Super Falcons striker was outstanding, and CAF has acknowledged her work.
Asisat Oshoala, a striker for the Super Falcons and Barcelona, is the lone Nigerian on the three women's shortlist for Female Player of the Year.
Oshoala excelled for Barcelona last season, guiding her team to a perfect league victory. After scoring 24 goals in the Liga Femini, the former FC Robo stars player also won the Golden boot award.
Oshoala wasn't the only outstanding Nigerian athlete in the previous year, though. With 10 goals in 23 league games for Atletico Madrid, Ajibade was also outstanding.
Ajibade was however passed over even for the ten-woman shortlist.
Oshoala would face competition from Grace Chanda of Zambia and Ajara Nchout Njoya of Cameroon on the Confederation of African Football's final three-woman list.
When comparing the three, Asisat appears to be the clear favorite, especially when taking club accomplishment into account.
Oshoala hasn't exactly shone for the national team, especially after she was forced to withdraw from the Women's Africa Cup of Nations after suffering an injury in Nigeria's opening match.
But when the awards ceremony goes place on Thursday, the Barcelona star hopes to become the first player to win the prize five times.
Chima Ugo is a patriotic Nigerian, a journalist, blogger and singer who is so much interested in the internet, journalism, and blogging and have been for half a decade.