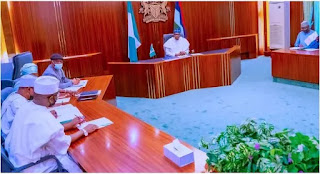 The President, Major General Muhammadu Buhari (retd. ), has given the Minister of Education, Mallam Adamu Adamu, two weeks to resolve issues of contention regarding the Academic Staff Union of Universities' strike action.

The directive was issued by the President on Tuesday during a meeting with the minister and other relevant agencies.

Buhari called the meeting to hear from government representatives about why the strike had lasted so long.

After hearing from the relevant ministries and departments, the President directed the Minister of Education to resolve the issues within two weeks and report back to him.

PRIME9JAONLINEMEDIA learned that, in addition to the directive to the education minister, the President had directed that the Minister of Labour and Employment, Chris Ngige, and the Secretary to the Government of the Federation, Boss Mustapha, be present at all meetings in order to resolve the crisis in a timely manner.

Adamu, Ngige, and Mustapha were present, as well as the Ministers of Finance, Budget, and National Planning, Zainab Ahmed; Communications and Digital Economy, Isa Pantami; the Federation's Head of Service, Folashade Yemi-Esan; the Chairman of the National Salaries, Income, and Wages Commission, Ekpo Nta; and the Director-General Budget Office, Ben Akabuez.

According to PRIME9JAONLINEMEDIA, the Nigeria Labour Congress has declared a nationwide protest in solidarity with the lecturers on July 26 and 27.

Student organizations and civil rights organizations have also backed the NLC's call to action, promising to join the workers' union at the barricade.