Building collapse in Lagos gets one person injured. 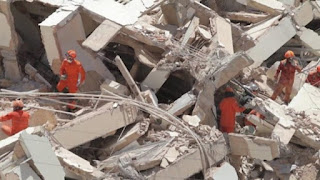 A two-story structure fell in the Onipanu neighborhood of Lagos State, injuring one person and requiring hospitalization.

According to reports, the incident took place on Wednesday at around 1.07 am.

The incident was verified by a local source who requests anonymity, who also noted that the building is close to the rail line.

Yes, a structure fell during the early hours of today near the Oju Irin (train line) location, he said.

The Lagos State Emergency Management Agency confirmed the occurrence and stated that the building was an abandoned two-story structure that fell to the ground.

The inquiry, according to LASEMA, showed that the incident happened at around 12:45 in the morning because of the structure's age.

Thankfully, there were no deaths. However, one adult male who had a slight injury was hospitalized.

The agency issued a statement on Wednesday stating that "the impacted building has been sealed off in order to prevent any harm."