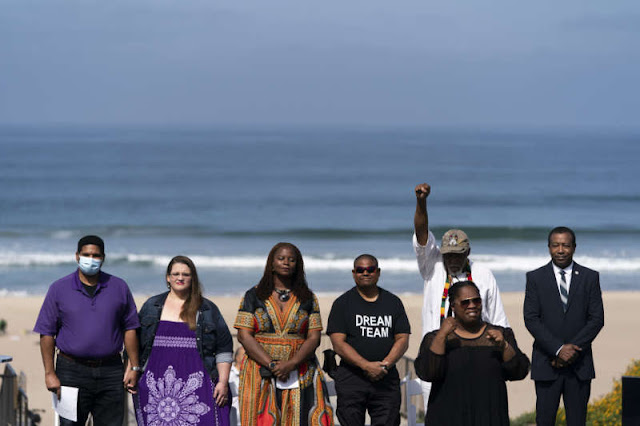 Prior to being taken by local authorities in the 1920s, a Black-owned beach in the United States that served as a rare resort for Black visitors in segregation-era California has been returned to the lineal descendants of its original owners.
Longtime activists and elected leaders in the area claim that the decision by authorities to seize the land owned by a Black couple, Charles and Willa Bruce, in Manhattan Beach, Los Angeles County, in 1924 was driven by prejudice.
In a Wednesday ceremony, Los Angeles County officials returned the deed of the prime property to Marcus and Derrick Bruce, the great-grandsons of the property’s owners, in what they described as the righting of a century-old racial injustice.

“It’s surreal and it’s almost like being transported to the other side of the known universe,” said Anthony Bruce, a great-great-grandson of the Bruce couple. “It’s just I want to make sure that I don’t lose focus as to what Charles and Willa’s dream was.”

Community activist Kavon Ward, of Justice for Bruce’s Beach which spearheaded the effort to return the land, watched the handover from the crowd.

“This is one win, but we deserve more wins,” she said. “And I’m going to help all the Black families that I can try to reclaim the land that was stolen from them.”

Charles and Willa Bruce bought the sprawling 650 square metres (7,000 square feet) property in 1912, but suffered racial harassment from white neighbours as they established a resort for Black patrons.

Janice Hahn, a member of the county board of supervisors, learned about the property’s history and launched the complex process of returning the property to the heirs of the Bruces after consulting county lawyers.

The process required state legislation and vote by the county board of supervisors, as well as the task of identifying the rightful heirs.

Hahn said she hoped the apparently unprecedented process would have a knock-on effect.

“Today, we’re sending a message to every government in this nation confronted with this same challenge: This work is no longer unprecedented,” Hahn told Reuters news agency at the ceremony.

Under an agreement with the Bruces, Los Angeles County will lease the beach, which houses a lifeguard training facility, at an annual rent of $413,000 plus all operation and maintenance costs. The county also maintains the right to outright buy the land for up to $20m.

“This is the deed right here,” Derrick Bruce said at the ceremony. “And this means a great deal to us because our forbearers struggled greatly to accumulate enough wealth to buy land here in this Manhattan Beach.”
Chima Ugo is a patriotic Nigerian, a journalist, blogger and singer who is so much interested in the internet, journalism, and blogging and have been for half a decade.