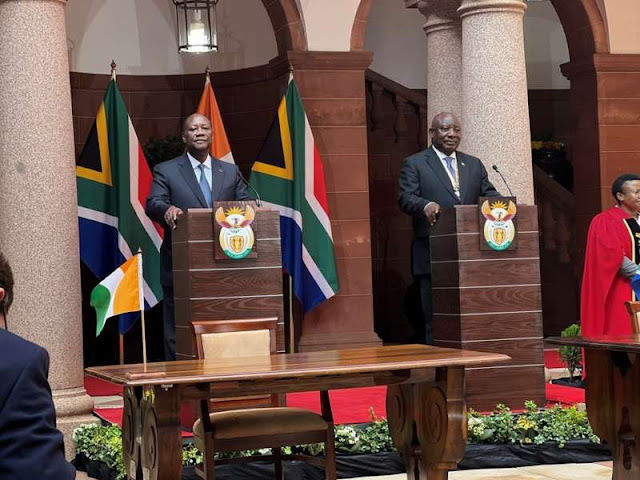 Ukraine is one of the leading suppliers of grain to several countries across the world, but trade was disrupted when the war began in February. A blockade in the black sea affected Ukrainian trade ships’ departure and many countries experienced grain shortages, as well as shortages of other commodities, such as fertilisers.

While Ramaphosa was pleased about a UN-backed grain export deal, he warned that the war was a cautionary tale for Africa.

“We are pleased that the secretary-general of the UN is headed to Turkey to sign the agreement, an agreement discussed at the G7 meeting. We encouraged all parties, whether Russia or Ukraine, to ensure that the agreement was signed to allow those ships to go through that corridor.

“It has taken much too long, in my view, because that conflict has put a stop to the exportation of grain and fertilisers to various parts of the world,” Ramaphosa said.

He added that those who saw the agreement as a signal of a possible end to the war would not be wrong.

“Yes we should, hopefully, see it in that regard. Everyone wants to see peace and an end to that conflict.”

The president compared the need for the continent to be self-reliant, to a similar need witnessed with the supply of vaccines during the peak of the Covid-19 pandemic.

“Sometimes, these conflicts should be seen as opportunities for us to see ourselves as Africa, and for us to look at our weaknesses and incapacities. Africa has become so reliant on food security for inputs that enable food production from other countries. We proposed, and the EU supported us in this regard when it comes to food security, we should also rely on ourselves for food commodities such as fertilisers to be produced here.”

The December visit was the first by a South African president in years.

A large delegation of ministers from both countries attended the ceremony at the Union Buildings on Friday, where bilateral talks ensued. Nine memorandums of understanding were signed in December and on Friday, the two countries agreed on other sectors of cooperation.

Ouattara said his talks with Ramaphosa symbolised the solidifying of a path to development for both countries.

Ramaphosa described the talks as “warm”.

“The visit shows a commitment to strengthening trade between our two countries. We signed nine agreements and memorandums of agreements in December while in Ivory Coast. Today we have signed six additional agreements,” he said.

He said the agreements focused on shared interests, youth development, women empowerment and economic sectors, such as oil, gas, agriculture, defence and transport.

Trade between the two countries increased from R1.3 billion in 2019 to R2 billion in 2021.
Chima Ugo is a patriotic Nigerian, a journalist, blogger and singer who is so much interested in the internet, journalism, and blogging and have been for half a decade.