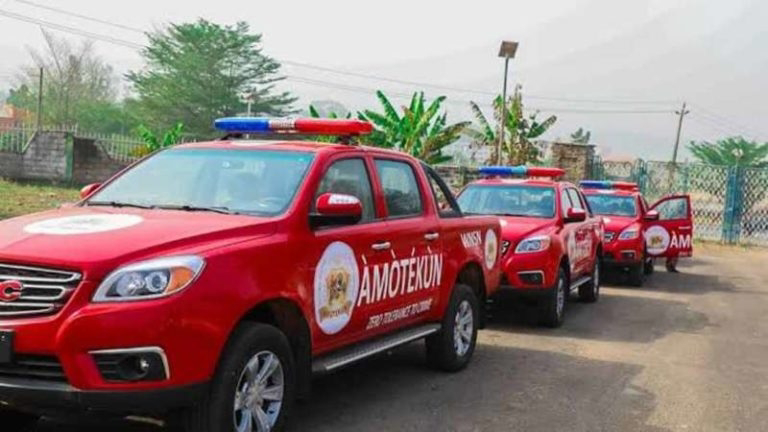 Operatives of Amotekun Corps in Ekiti State have arrested four women, including two clerics for the alleged trafficking of children to Libya.
The suspects identified simply as Dorcas, Ebunoluwa, Toyin and Boluwatife, were nabbed over their alleged involvement in the case of two children whose trafficking was botched by Amotekun operatives at the point of being taken out of the country.
The victims alleged that the suspects promised to assist them to London, not knowing they were to be taken to Libya.
One of the victims, who said she had absconded from home because of her cousin, who had once raped her, said, “I was on the street, pacing around when a prophetess who owned a church found me and the other person, and we had to stay with her.
“A boy, who saw us in the church then took us to his mother, who also has a church, promising that she could help us travel to London.
“His mother also assured us that we would travel to London, saying that we would board a bus to Warri from Akure the following day. She told us that someone would meet with us in Warri.
“When we got to Warri, we met with a sister called Lizzy, who accommodated us for two days, afterwards, led us to where we boarded a bus to Onitsha. We were in Jalingo in Taraba State when Amotekun’s efforts led to our rescue,” she said.
Ekiti Amotekun Corps Commandant, Brigadier General Joe Komolafe (retd.), who revealed that the suspects were arrested following a tip-off, said, “Preliminary investigation revealed that the suspects who have formed a cartel have finalised arrangements to ferry the two victims to Libya without the consent of their parents.
“They were already in Jalingo on their way out of the country when we told the cartel on the phone that we were on their trail. To evade arrest, they made a detour. We continued to track them until they got to Ado Ekiti and were consequently arrested.
“We have handed over the suspects to the National Agency for the Prohibition of Trafficking in Persons for further investigation and consequent prosecution,” the Amotekun commander added.