Eloho Otobo, a former diplomat from Nigeria, was buried in New York 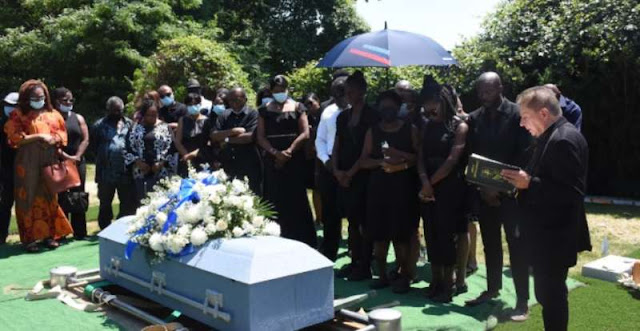 The remains of a former Nigerian diplomat, Amb. Eloho Otobo, has been laid to rest at Gate of Heaven Cemetery, Westchester, New York, U.S.

Dignitaries from Nigeria and the U.S. were on ground to pay their last respect to the late ambassador, who died at the age of 70.

Families, friends, colleagues, diplomats, parishioners and priests at the funeral service held on Friday at Westchester Funeral Home, extolled the virtues of late Otobo, describing him as a great leader, a committed man, generous Christian and a prolific writer.

In his reflection, Rev. Fr. Robert Grippo, Parish Priest of Our Lady of Fatima and Annunciation, Westchester, described the late Otobo as a generous and committed man, who served God faithfully.

Grippo said the deceased, practising catholic, was a man of great faith, who would never compromise his Christian values in any way.

“We thank God for the tremendous service he offered in the parish and outside to better the lives of so many people,’’ he said.

The priest, who took his reflection from Romans Chapter eight verses 14 to 28, urged people to appreciate the shortness of life and be conscious of eternity.

According to him, life is a temporary journey and that every person will die at the appointed time to face judgment to eternal life or eternal condemnation.

Amb. Lot Egopija, the Consul-General of Nigeria in New York, said late Otobo was a great man and unifier.

“Those of us in Nigeria House can testify to that; he related to all of us as his friends. He was always willing to offer suggestions to improve the services at the Consulate,’’ he said.

Samson Osiene, who spoke on behalf of Isoko Association of New York, described Otobo as a generous man and a great scholar who shared his knowledge with those in the association and outside.

“He was a pillar of the association; he shared his knowledge with us, including the books he wrote. He would be remembered for his immense contributions to the association,’’ he said.

Paying tributes to the deceased, Oheri Otobo, said his father was an incredible, kind, caring and a great father, saying life without him would be difficult.

“Daddy, you were a great man, a caring father and you tried your best to help people. Your legacy of love lives on,” he said.

Atabu Eloho, younger brother to the deceased said Otobo wore different hats in different cycles to so many people.

“To the Isoko community, he was a team leader and a counselor on various issues and to the Otobos, he was a role model, father figure, a planner, a leader and beacon of light,’’ he said.

According to Atabu, the deceased was not only his elder brother but also a friend, adviser, a role model, and a mentor.

“He was a great and outstanding scholar; he encouraged and pushed me to advance in my writing, that is why I called him a ‘task master’.

According to Chiwoto, Otobo’s articles had helped to enrich his knowledge on global issues and he was working to publish a work on the impact of Ukraine crisis on Africa.

Chiwota said Otobo, after his retirement, was in touch with most of his colleagues at the UN and he would be dearly missed.

Newsmen report that Otobo was declared missing on June 15 by the Tuckahoe Police Department, New York, and he was later found dead on June 23.

Otobo, a retired diplomat with the UN headquarters, served as a Director and Deputy Head, UN Peace building Support Office (PBSO) of the Peace building Commission at the UN Headquarters from 2006 to 2013.

Until his death, he was a Non-Resident Senior Fellow in Peace building and Global Governance Institute in Brussels, Belgium.

Otobo joined the UN after a distinguished career in the diplomatic service of the Federal Republic of Nigeria.