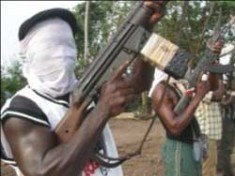 According to reports, unidentified gunmen have targeted Lasun Yusuf's apartment in Ilobu, Osun State, where he is running for governor as the Labour Party candidate on July 16.
The former deputy speaker of the House of Representatives and his family members, who had returned home to celebrate the Eid Kabir festival, were all at home when the attackers struck in the early hours of Monday, according to Wole Oladimeji, the media assistant to Lasun Yusuff, who confirmed the attack.
When the attackers were unable to enter the property, Oladimeji claims that they fired rounds from outside the compound at the upper floor of the two-story building, where the bedrooms are located, and damaged the aluminium windows.
He also revealed that Lasun and a few family members were present when the attack occurred. There was, however, no casualty reported.

“It is true. My principal is already working on informing security agents of the development. He was in the house with members of his family. But no one was injured.

“They fired into the upper floor of the storey building where bedrooms are because they could not gain entrance into the building,” Oladimeji said.
Chima Ugo is a patriotic Nigerian, a journalist, blogger and singer who is so much interested in the internet, journalism, and blogging and have been for half a decade.