I Received N200 Once for a Movie Role - Aguba 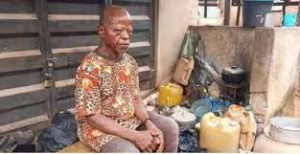 Actor Kenneth Jideofor, better known by his stage as Aguba, claims to have received N5,000 for some of his film parts.
The seasoned actor revealed this in a recent video. He previously described himself as "homeless."
Aguba said that he had been in numerous films for which the makers reportedly declined to pay him.
He said that the film producers offered him N5,000 when they finally paid.
He claimed that a movie producer once paid him N200 after he asked for his remuneration.

“I’ve acted in so many movies, however, no one paid me. I remember someone came to film me. I told him that he didn’t pay and he gave me N200. I mean he gave me N200, what should I use it for?” Aguba asked.

“He told me to go home and promised to come to pay me my money. N200,000 was what I charged him and he has not paid till now. It’s getting to three months. If anyone asks him, he’ll claim that he has paid me.

“Is it good? I’ve acted in many movies. I acted in ‘Igwe Osuofia’, ‘Aguba’ that people know me for, I acted in ‘Ogbanje’, ‘Returning from America’, ‘Million Money’. I also acted with Pete Edochie.

“I’ve acted in so many movies between Calabar and Owerri. I’ve acted everywhere and I started in 2003. They just suffered me, they can’t pay me. I remember acting in Jos, he carried my money and ask me to come back to Jos to collect my money.

“How can? How much will I spend on the journey before I reach Jos? He kept that one. Many times it happened, they ate my money. They didn’t pay me well. They gave me N5000, they are happy. They think they are paying me.”

African Examiner writes that the actor was homeless and Chibuzor Chinyere, the general overseer of Omega Power Ministry (OPM), offered free accommodation and medical treatment to the actor.