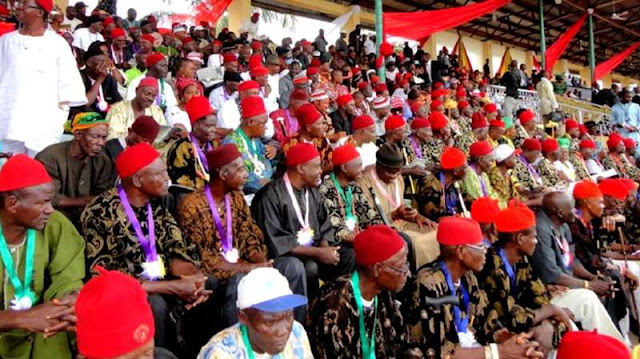 Imeobi Igbo Forum, a Pan-Igbo grassroots sociocultural organisation, has referred to the current South-East political class as the "worst in history."
The organisation requested that the current Igbo representatives in the National Assembly be disqualified from running in the general elections in 2023 because they have failed the Igbo race.
In a press release sent out yesterday through SMS, the National Chairman of the Forum, Dr. Mike Ikegulu, chastised them for their public behaviour and remarks, calling it "disappointing" and "painful," all in an effort to appease some ethnic group chieftains.
Ikegulu said: “Since the emergence of the present crop of Igbo political and business elites, Ndigbo have continued to be shamed and short-changed. We are not genuinely being represented in any sphere of Nigeria affairs.

“Their public conduct and utterances are disappointing and painful, just to please the chieftains of some ethnic groups. These Igbo elites have raped and abandoned Ndigbo.

“Those at the national assembly are insensitive to our collective interests. Never lending a voice on anything of interest to Ndigbo for pecuniary interest and personal aggrandizement.”

He urged the populace to vote out politicians who had ill intentions for the area by taking advantage of the ongoing Permanent Voters Card, or PVC, registration process.
He bemoaned the fact that Ndigbo are alien to the current Nigerian system of government and added that the region's leaders are chosen by their acts and words, not by election or appointment.
having IPOB banned, a referendum denied, Nnamdi Kanu framed up, abducted, and imprisoned, all in an effort to quiet him.
“They keep mum over the atrocities committed by occupying forces and the continuing intimidation and slaughter of Igbo youths for agitation.

“Igbo politicians followed the dollars in the party primaries, disregarding the recurring political realities which give us the short end of the stick.

“The present and future generations of Ndigbo will look down on the present group of Igbo political and economic elites who have largely relocated to Abuja, as the worst in history.

“The present Igbo legislators in the national assembly should not be allowed back, for toying with the destiny of Ndigbo, in the complex country of Nigeria.”

“They are there for self, family and friends. One wonders why they are gearing up to return to the same indolent representation at the national assembly in 2023”.

“Even the serving governors are buying their way to the senate as retirement home, this is unacceptable to us.”
Chima Ugo is a patriotic Nigerian, a journalist, blogger and singer who is so much interested in the internet, journalism, and blogging and have been for half a decade.