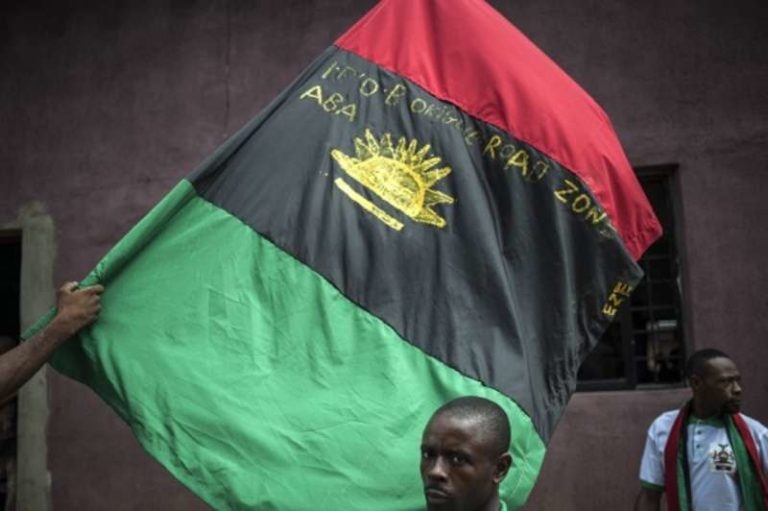 The Indigenous People of Biafra (IPOB) has declared Commander of Ebubeagu security outfit in Imo State, Izuchukwu Akuegbulanwa, wanted over alleged killing of 14 wedding guests in Awo-Omamma, Oru East Local Government Area.
The group also said N20m bounty awaits anyone with useful information that could lead to tracking him.
Governor Hope Uzodinma and the Department of State Services (DSS) had absolved Ebubeagu from the act, attributing it to the DSS.
Uzodinma also described those killed as members of the security arm of the IPOB – Eastern Security Network (ESN).
But in a statement by the Media and Publicity Secretary of IPOB, the separatist group maintained that Ebubeagu was responsible and culpable to the act.
It regretted Southeast Governors’ collaboration with Federal Government to attack innocent volunteers sacrificing their lives to protect their ancestral land for their selfish interests, saying such act was the reason they worth nothing before their Northern counterparts.
The statement partly reads: “As a result of his murderous terrorist activities against our people, IPOB hereby declares this Ebube-Agu Commander in Imo State wanted.
“He is now a wanted person in Biafra land. Anybody who gives useful information about him and what will lead to the capture of this murderer will get a reward of 2 million Naira from IPOB. ESN Imo State Command has also been given a matching order to look for him to account for the innocent blood of Biafrans his crimininal gang has wasted.
“But ESN and IPOB will handle his own case and he will reap the reward of his atrocities. He can’t hide forever because the gods of the land is against him and his sponsors.
“We enjoin every Biafran especially Imo people to be on the lookout for him and give us useful information about his movements. We must hold him to account for the innocent people he has wasted in cold blood.
“This was the reason IPOB opposed the formation of Ebube-Agu security outfit by South East Governors because we knew they did not mean well for our people but unfortunately some people misunderstood us.
“It’s very unfortunate that instead of supporting the gallant ESN operatives launched by our leader to protect BIAFRA land against criminal herdsmen and jihadists, South East Governors because of their selfish political interests colluded with the federal government to attack innocent volunteers sacrificing their lives to protect their ancestral land. What a foolish act!
“That’s why South East Governors do not worth anything before their Northern counterparts. How many Northern Governors have ever exposed bandits and terrorists rampaging their states?
“They even pay them tribute and their Emirs give Chieftaincy titles to mass murderers but in Biafra land our Governors take the lead in killing their own youths. Posterity will judge all of them.”
Chima Ugo is a patriotic Nigerian, a journalist, blogger and singer who is so much interested in the internet, journalism, and blogging and have been for half a decade.