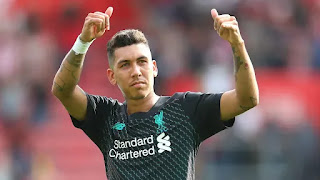 Juventus has made a £19.5 million bid for Liverpool forward Roberto Firmino.

Fermino's contract with Liverpool expires in a year.

Liverpool may be willing to let the Brazilian leave now rather than lose him for nothing next year.

According to TuttoJuve, the Serie A giants want to sign Fermino as they look to improve their frontline ahead of next season.

Firmino has 98 goals for Liverpool since joining the club in 2015.