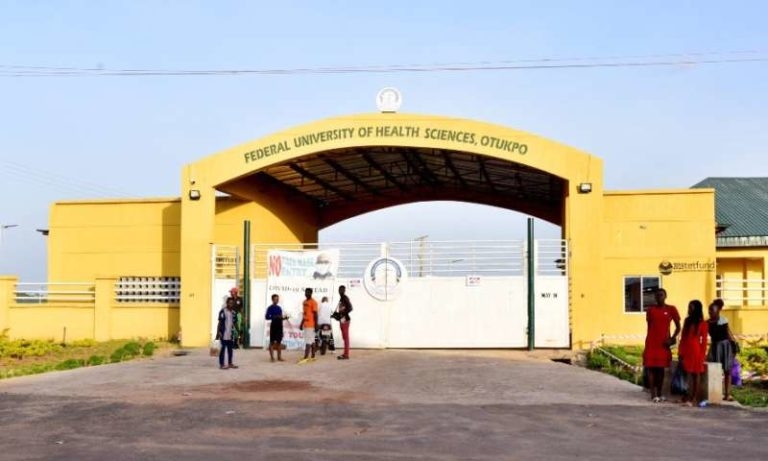 President Muhammadu Buhari on Monday said that the establishment of the Federal University of Health Science, Otukpo, Benue State was part of his administration’s at taking tertiary institutions closer to the people.
The president stated this when he performed the groundbreaking ceremony of the structure at the permanent site of the Federal University of Health Science located in the Otukpo area of Benue State.
Represented by the Minister of Education, Mallam Adamu Adamu explained that the establishment of the university was part of his administration’s efforts at furthering the development of education adding that it will also pave way for job creation and domestication of research for the treatment of dread diseases such as Lassa fever, Ebola and malaria.
The president further said that the project was part of ongoing efforts by the Federal Government toward building a world-class University of sciences that will promote science-based knowledge and research that can tackle health-related issues.
“You may recall that in 2015, FUSHO was established alongside five others by former President Goodluck Jonathan but was later embargoed. However, in 2019, l lifted the embargo and empower the management of the university to commence full academic activities.
“We are now committed more than ever before to achieving the ideals of the university which should be teaching, learning and cutting-edge research with greater vigour, as universities are known for the quality research that will contribute to national development
“Only recently, I approved the sum of N3billion as high impact intervention fund through the Tetfund for the university to further enhance the infrastructural facility development that will provide enabling environment for learning, research and innovation”, Buhari said
Speaking earlier, Vice Chancellor of the University, Prof. Innocent Ujah said the groundbreaking ceremony performed by the president brought joy to the Idoma and Benue community as a whole hence the establishment of the university adds to the educational and health development of Benue.
The VC however commended Buhari for the gracious approval of N3 billion to facilitate infrastructural facilities in the university.
Chima Ugo is a patriotic Nigerian, a journalist, blogger and singer who is so much interested in the internet, journalism, and blogging and have been for half a decade.