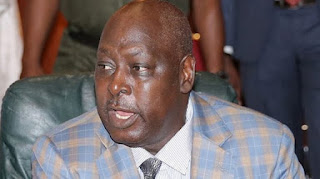 Engineer Babachir Lawal, a former Secretary to the Government of the Federation (SGF), has rejected Senator Kashim Shettima as the All Progressives Congress (APCvice )'s presidential candidate for the 2023 elections.

The public has been embroiled in a ferocious debate over this.

Babachir, who had previously been a strong supporter of Tinubu, disapproved of the presidential candidate's move.

The former SGF urged President Muhammadu Buhari to use his authority as the APC Leader and Commander-in-Chief to cancel Shettima's nomination in a statement on Tuesday night.

I had hoped to refrain from addressing the fatal mistake made by my dear friend, Senator Bola Ahmed Tinubu, in selecting a running mate. The last person to obstruct my dear friend Tinubu's bid for the presidency will be me. This is so that he can succeed Buhari as President of Nigeria, which has been my burning desire since 2011," Lawal added.

He claimed that he had voiced his concerns about the "pitfalls" of a Muslim-Muslim ticket to Tinubu and his friends.

He claimed that he had frequently debated with him the benefits and drawbacks of both ticket permutations and had expressed his discontent with the situation in both written and vocal form.

"Tinubu is an excellent man. He listens really well. He is quite modest and cordial with everyone. But I've come to understand that leaders with these attributes are most susceptible to influence from sycophants and lapdogs because that is how power works.

"They will tell him lies, defame and denigrate others, and basically do whatever to win his favor and to harm the reputations of well-meaning colleagues. I have a suspicion that my acquaintance has experienced this. Self-serving, hero-worshiping lapdogs have surrounded him.

"Things were never this this before. He surrounded himself with shrewd, street-smart men who could speak truth to power during his heyday in Lagos. He had Yemi Osinbajo, Babatunde Fashola, Dele Alake, Muiz Banire, Rauf Aregbesola, etc. The era of think tanks, strategic planning, monitoring and evaluation, values, and ideologies was that of Lagos.

But since then, these people have developed and moved on, creating their own systems and leaving my friend stranded. However, those who suffer from the present Nigerian maladies of religious intolerance, sycophancy, and morbid tribalism are the equivalent of Abuja.

The end effect is that they used Tinubu's long-term desire to run for president and used it to create a sense of desperation and a crescendo that readily justifies this demonic resort to a Muslim-Muslim ticket. This is the misfortune that my friend has had, Babachir stated.

He also questioned why Shetima, who he described as "overambitious man with a Machiavellian bent and lots of money to buy a preferred-candidate position among Tinubu's lapdogs," was chosen over other candidates.

He continued, "And as we are beginning to see, to also secure phony followers, especially from among the Christian community to assist wash his not so clean reputation. But according to a well-known adage, "Those whom the gods wish to kill they first make mad." It appears that the gods want to kill the APC and its presidential candidate, and they have picked Kashim Ibrahim as their super-ambitious weapon and the northern Muslim governors as their instrument.

Alhaji Kashim Shetima was given to Tinubu by the Northern governors as a Greek gift. I suggest Bola make sure Kashima's two hands are constantly empty and visible to him. Tinubu has decided what to do. And I'm sure he believes he is prepared for the result of that decision. He has made the decision to elevate religion above all other issues in Nigerian politics. And because he is a Muslim, he has decided to support his own faith. Christians can cast their ballots in flames for all he cares, Babachir continued.

He added that Tinubu must be made aware of the implications of this choice.

Some of them, he claimed, are the possibility of a nationwide Christian uprising against the APC that would seriously harm his prospects of winning the election.

He claimed that the change will also jeopardize the chances of all Christians running for office in Christian-majority areas.

A Muslim-Muslim ticket, he continued, would bring all APC members to their bottoms and should be rejected.