NEW STUDY: Men under the age of 40 shouldn't drink more than one shot glass of beer every day. 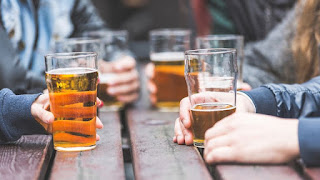 It may be much less than initially believed that alcohol causes health risks to those under the age of 40.

A new study reveals that a healthy daily limit for younger men is just one little, 38ml shot glass of beer each day.

Women under the age of 39 are permitted to drink a little more, up to two tablespoons of wine or 100 ml of beer.

The research strongly disagrees with NHS recommendations that Britons refrain from consistently consuming more than 14 units of alcohol each week.

That is equivalent to 10 small glasses of light wine, or six pints of average-strength beer.

However, for people over 40, a few drinks can really prevent diabetes, heart disease, and strokes.

Additionally, the hazards of "health loss from alcohol consumption" are only present for adults over 65 after the fourth normal drink.

Research suggests that there should be tailored alcohol advice depending on a person's age and where they live in the world. They also call for stronger guidance to warn younger adults of the risks caused by drinking.

According to a study of drinking patterns in 204 nations, it is anticipated that 1.34 billion people consumed dangerous levels of alcohol in 2020.

According to the survey, men made up 75% of those who drank in dangerous levels and were between the ages of 15 and 39.

They claimed that alcohol had no positive effects on health in those under the age of 40 and that it increases the chance of homicide and suicide as well as injuries from driving while intoxicated.

"Our message is obvious - young people should not drink, while elderly individuals may benefit from small amounts of alcohol," said senior author Dr. Emmanuela Gakidou, professor of health metrics sciences at the University of Washington's School of Medicine in the US.

While expecting young individuals to abstain from drinking may not be realistic, we believe it's vital to share the most recent research so that everyone may make educated decisions about their health.

Using data from the 2020 Global Burden of Disease study, researchers examined the impact of alcohol intake on 22 health outcomes, such as injuries, malignancies, and cardiovascular illnesses.

They calculated the amount of alcohol a person can consume before running the risk of endangering their health more than someone who abstains from alcohol.

They discovered that as one grows, more alcohol can be taken without raising health hazards.

The researchers indicated that "this is driven by changes in the principal causes of death and illness burden at various ages."

"Any degree of drinking increases the chance of accidents, but little doses of alcohol reduce the risk of various illnesses common in later age, such as diabetes and ischemic heart disease."