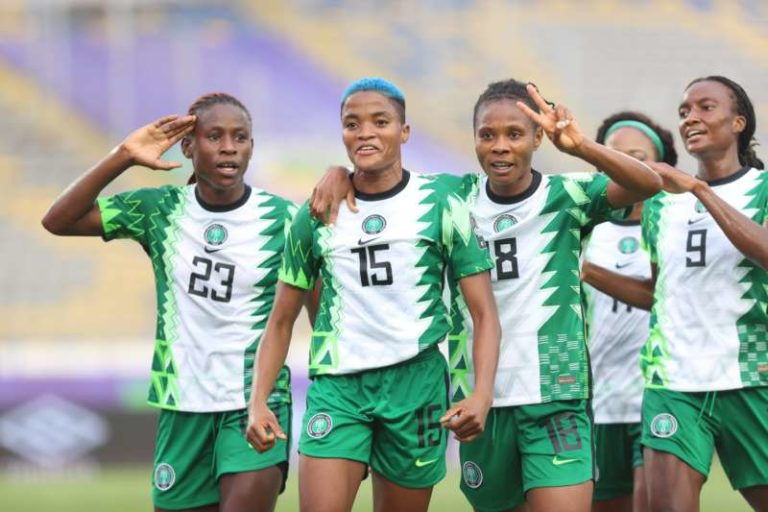 The Nigeria Football Federation (NFF) has hailed the heroic outing of the Super Falcons at the 2022 Women’s African Cup of Nations after their semifinal loss to host Morocco just as the federation has also secured top friendly matches for the team in readiness for the 2023 FIFA World Cup.
Also, the team is scheduled to play the United States Women’s National Team in Kansas City and Washington D. C in September, and also to fly to Japan to take on the Asian team in Kobe in October.
“Of course, we would have been happy to be in the Final and chase a 10th title but I am happy with the performance of the team and the way and manner they approached the game despite all sorts of setbacks and intimidation,” President of the Nigeria Football Federation Amaju Melvin Pinnick said yesterday.“To play 50 minutes of a game with only nine players is not an easy task.
“The Super Falcons gave their all and were truly fabulous. They had the ‘Nigeria spirit’ in them and showed a sense of patriotism, were dogged and refused to give up. Penalties are forever a lottery, so it could have gone either way. I commend the team for the outing.”
The expulsion of midfielder Halimat Ayinde in the 49th minute reduced Nigeria to 10 players, before referee Maria Rivet from Mauritius handed forward Rasheedat Ajibade a red card in the 70th minute, which cut Nigeria’s playing strength by two for the remaining 50 minutes (20 minutes of regulation and 30 minutes of extra time) of the thrilling encounter.
Uchenna Kanu had a touch on Nigeria’s goal in the 62nd minute though it was recorded as an own goal by Yasmin Mrabet, and Nigeria could have put the match in the bag when substitute Gift Monday rocked the crossbar with a well-taken shot from outside the box 11 minutes into extra time.
“Our girls did a massive job on a night they were not only depleted but challenged by laser lights trained on their eyes by the crowd. I am enamoured by their resilience and tenacity,” the FIFA Council Member further noted. “ The next step now is for the Federation to do everything possible to prepare the team adequately for the FIFA World Cup finals coming up next year.”
Pinnick added that he is delighted with the strong pipeline at the moment, with the U20 girls and U17 girls having also qualified for their respective FIFA World Cup tournaments and boasting interesting prospects who can easily fit into the senior team.
“The supply line looks strong enough to continue to present us with good and ambitious players for the coming years. We will have a delightful combination of experienced and youthful players for the World Cup finals.”
Already, the NFF has secured a total of four friendly matches for the Falcons in the Fall, with the team scheduled to play the United States Women’s National Team in Kansas City and Washington D. C in September, and also to fly to Japan to take on that country’s women’s squad in Kobe in October. Both opponents offer diversity in style and approach.
Nigeria, Morocco, South Africa and Zambia have qualified automatically for the 32-team FIFA Women’s World Cup fiesta to be staged in five Australian cities and four New Zealand cities 20th July – 20th August 2023. Cameroon and Senegal will battle for slots at a 10-team Playoff Tournament in New Zealand early next year.
Meanwhile, the Super Falcons have arrived in Casablanca on Tuesday for Friday’s third place match against Zambia at the Complexe Mohamed V.
Chima Ugo is a patriotic Nigerian, a journalist, blogger and singer who is so much interested in the internet, journalism, and blogging and have been for half a decade.