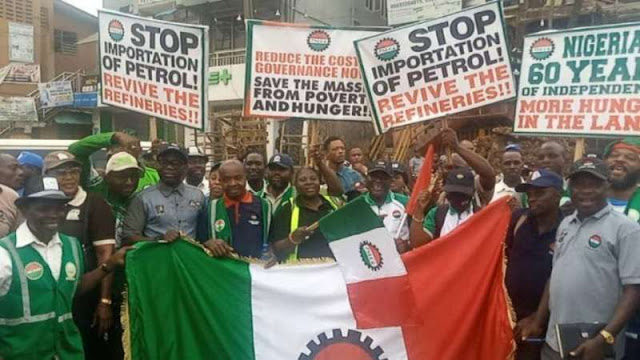 Security personnel are heavily present at the protest the Nigeria Labour Congress (NLC) organised in support of the striking Academic Staff Union of Universities (ASUU).
At the under-bridge axis in Ikeja, union members, other unions, and civil society organisations have assembled.
Vehicle traffic heading towards the protest site has been impeded.
Police officers and other security personnel are present at the location to stop thugs from attacking the demonstrators or breaking in.
The Nation writes. After the FG refused to comply with some of its demands, ASUU began its ongoing strike on February 14 and closed all public colleges.
Release of funds for university revitalization, renegotiation of the 2009 FGN/ASUU agreement, release of earned allowances for university lecturers, and implementation of the University Transparency and Accountability Solution platform for the payment of salaries and allowances for university lecturers are among the demands.
Chima Ugo is a patriotic Nigerian, a journalist, blogger and singer who is so much interested in the internet, journalism, and blogging and have been for half a decade.