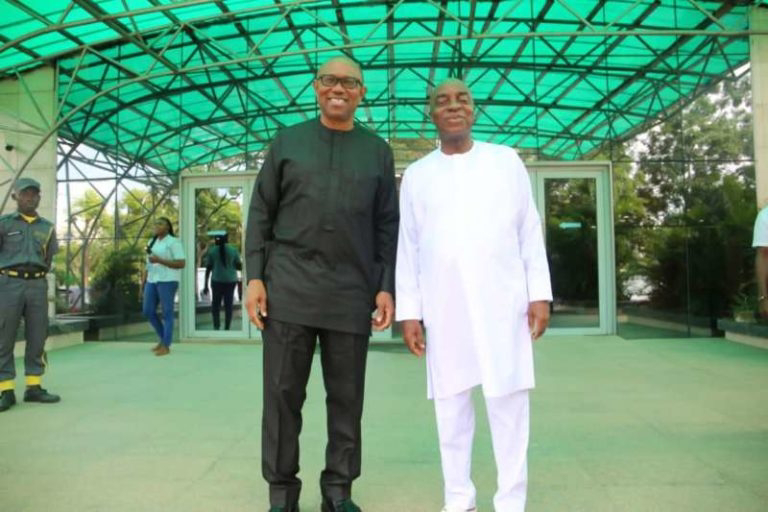 Members of the Coalition of Arewa Youths for Peace and National Development (CAYPND) have lauded the presidential candidate of the Labour Party (LP) Peter Obi over his visits to Muslim and Christian leaders as well as elder statesmen in the country.
The youths further described as auspicious the ongoing consultations Obi is undertaking to sell his New Nigeria Agenda to prominent personalities.
The former Anambra Governor visited the founder of Living Faith Church Worldwide, Bishop David Oyedepo at the church’s Canaan Land headquarters in Ogun State, where he was said to have shared his vision for a new Nigeria with the renowned cleric.
Apart from the visit to Oyedepo, Obi also visited the chairman of the Northern Elders Forum (NEF) and former Vice Chancellor of Ahmadu Bello University (ABU), Zaria, Prof. Ango Abdullahi, a few days back.
Speaking on the development, the Arewa youths said it was a testimony that Obi may pass arguably as the most serious presidential candidate contesting the presidential election holding in February, 2023.
They said Obi chose to visit Oyedepo on his birthday to seek wise counsel from the powerful Christian cleric, arguing that other politicians would have likely organized parties and other ceremonies where hundreds of millions of naira would have been spent on vanities.
A statement by the national president, Alhaji Mohammed Gwadabe, CAYPND said its support for the former Anambra Governor, an Igbo man, was informed by its demonstrable capacity to change the course of the Nigerian nation.
“Apart from his deep knowledge of the Nigerian economy, coupled with his shrewd management of resources, we dare to say that Obi is a highly-detribalised Nigerian, who views the nation as one entity, with opportunities for growth in all the states of the Federation.
“Nigeria is so divided at the moment along all the known fault lines, and we think that Peter Obi, the amiable presidential candidate of LP, is the answer that we need to our challenges, which include insecurity, youth unemployment, poverty, nepotism among others.
“We have also been following – with keen interests – his ongoing consultations with both Muslim, and Christian leaders in the country, and we make bold to say that only a focused, detribalised politician would embark on such salutary outings.
“This is more so that it is happening at a time that mutual distrust, religious intolerance, and other tendencies, can easily be felt and touched by Nigerians.
“We, therefore, enjoin Peter Obi to sustain the momentum of his consultations across the divides, especially on religious leaders of the different faiths, as that will continue to endear him to his teeming supporters, who are determined to elect him as President come February, 2023.
Chima Ugo is a patriotic Nigerian, a journalist, blogger and singer who is so much interested in the internet, journalism, and blogging and have been for half a decade.