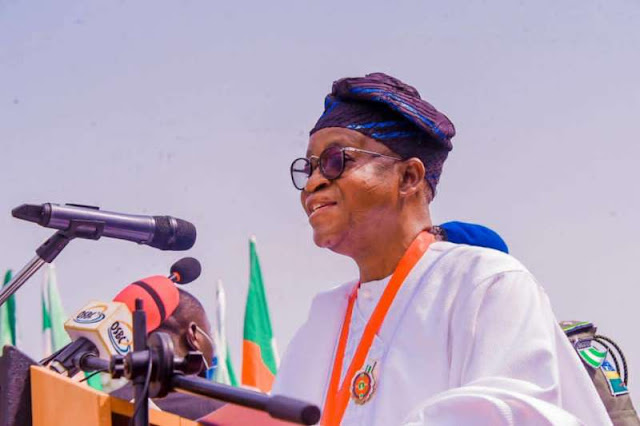 The All Progressives Congress (APC) candidate for governor of Osun State, Adegboyega Oyetola, was not disqualified from participating in tomorrow's election by the Federal High Court in Abuja.
In a decision written by Justice Inyang Ekwo, the court ruled that the lawsuit filed to challenge Oyetola's selection as the APC's flag-bearer lacked merit and should be dismissed.
A disgruntled party candidate named Moshood Adeoti filed the lawsuit with the court with the filing number FHC/ABJ/CS/203/2022.
Adeoti had, among other things, contested Oyetola's nomination as the APC governorship candidate, claiming that it was invalid.
He claimed that the governor improperly participated in the governor's primary while serving on the APC's Caretaker Extraordinary and Convention Planning Committee, or CECPC.
By enabling the Defendant to compete for reelection while still serving as a committee member, the Plaintiff claimed that the APC had violated Article 31(iii) of its own Constitution and Section 22(2) of the 1999 Constitution (as modified).
Through his legal team, lead by Chiesonu Okpoko, SAN, Adeoti argued that Governor Oyetola should have resigned from the aforementioned committee at least 30 days before to the February 19 primary election.
He sought the court to nullify Oyetola's candidacy as a result.
In the meantime, the Independent National Electoral Commission, INEC, and the APC filed preliminary objections to oppose the lawsuit, which they claimed had any basis. These parties were joined by governor Oyetola.
The APC further questioned the court's authority to interfere in what it characterized as a political party's personal matters.
Yesterday, Justice Ekwo handed down his ruling, concluding that the Plaintiff had failed to show a sufficient basis for Oyetola's disqualification.
The court determined that the lawsuit, which it deemed to be a misuse of the legal system, was brought outside the parameters of Section 22 of the 1999 Constitution, as amended, and Section 87(9) of the Electoral Act.
It emphasized that before bringing the action, the Plaintiff had not used the internal dispute resolution procedure offered by the parties.
Furthermore, the court pointed out that the NEC of the APC, which is a formal organization recognized by the party's Constitution, is not the CECPC, of which governor Oyetola was a member.
While agreeing that the matter of nominating candidates for elective offices is an internal matter of parties that no court can inquire into except where expressly permitted by law, Justice Ekwo claimed that the CECPC was merely an ad hoc body that was established in the absence of the NEC that is required by law.
He questioned why Adeoti pursued legal action after fully participating in the relevant primary election, receiving some votes, and losing to Oyetola.
As a result, the court dismissed the case for failing to state a claim against the defendants.
“I hereby decline jurisdiction in the internal affairs of a political party. Where a member is dissatisfied with the party’s decision, the only option is for such person to leave.

“The plaintiff has shown no cause of action in the case and I so hold. This suit is accordingly dismissed as an abuse of court process.”