Report: Musk had an affair with the wife of Google Co-founder 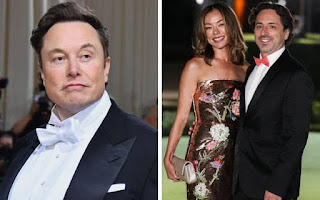 The long-standing friendship between Elon Musk, the richest man in the world, and Sergey Brin, the co-founder of Google, has come to an end due to allegations that Musk had an affair with Nicole Shanahan, Brin's wife.

According to a report published by the Wall Street Journal on Sunday, this is the case.

According to "people familiar with the matter," the brief love affair that took place in December 2021 led Brin to file for divorce in January 2022, according to WSJ.

Sources claim that weeks after learning of Musk's affair with his wife, Brin filed for divorce.

Despite claims to the contrary, Brin and his wife were reportedly still cohabitating at the time of the divorce, which listed December 15, 2021 as the separation date.

According to the Bloomberg Billionaires Index, Brin is ranked eighth globally and has $95 billion, while Musk, the richest person in the world, is estimated to have a fortune worth $240 billion.

The WSJ reported that the two had been close friends for a long time and that Musk frequently visited the home of the Google co-founder in Silicon Valley.

"During the 2008 financial crisis, when Tesla was struggling to increase production, Mr. Brin gave Mr. Musk about $500,000 for the company. One of Tesla's first all-electric sport utility vehicles was given to Mr. Brin by Mr. Musk in 2015, the report continued.

Although "it couldn't be learned how large those investments are, or whether there have been any sales," Brin reportedly instructed his financial advisors to sell his personal investments in Mr. Musk's companies after the alleged affair.