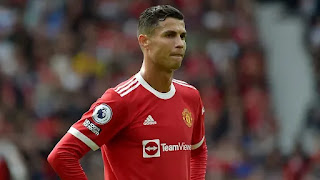 Manchester United forward Cristiano Ronaldo's only two options have been revealed as his future at Old Trafford remains uncertain.

Ronaldo has already informed Manchester United that he wishes to leave the club this summer as a result of the club's failure to qualify for the UEFA Champions League and their lack of ambition in the transfer market.

The Portugal captain wants to play in the Champions League next season, and his agent Jorge Mendes has been in talks with several top European clubs, including Chelsea, Atletico Madrid, Bayern Munich, Barcelona, Real Madrid, and Paris Saint-Germain.

However, following weeks of speculation, it appears that Ronaldo may only have two options this summer.

According to L'Equipe, ahead of the new season, "Ronaldo will either move to Atletico Madrid or stay at Manchester United this summer."

According to the report, the latter is unlikely due to how Mendes would interpret his client's inability to find a Champions League club.