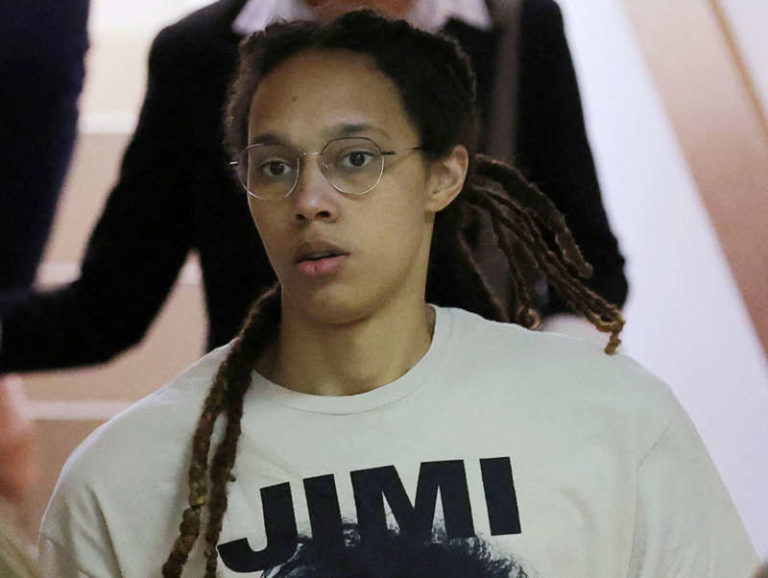 A Russian basketball club director and team captain have testified on behalf of jailed US basketball star Brittney Griner, as the two-time Olympic gold medalist made her third appearance in a Russian court on drugs charges.
Defence lawyer Maria Blagovolina said UMMC Ekaterinburg club boss Maxim Ryabkov had testified to Griner’s good character during the hearing on Thursday, which was closed to reporters.
She said Ryabkov told the court of Griner’s “outstanding abilities as a player and personal contribution to strengthening team spirit”.
“It’s the first time we saw our basketball player. She looks good,” Ryabkov also told reporters in the town of Khimki, on the outskirts of Moscow, where the trial is being held. “Our aim was to show what a big role she played in the club, in Russian basketball in general.”
Griner last week pleaded guilty to drug possession and smuggling, but said she had no intention of committing a crime.
The Women’s National Basketball Association (WNBA) All-Star centre was detained on February 17 at Moscow’s Sheremetyevo Airport after vape canisters with cannabis oil allegedly were found in her luggage.
She was returning to Russia to play for UMMC Ekaterinburg, a team in the Russian Premier League, before the US season resumed, a common practice for players, who can earn much higher salaries in foreign leagues than on domestic teams.
Griner faces up to 10 years in prison if convicted.
UMMC Ekaterinburg captain Yevgenia Belyakova also testified in Griner’s defence on Thursday.
“We very much miss her, her energy,” Belyakova told reporters, adding that she wanted to “stand by [Griner] in these moments” and hoped that the “case will be over”.
Griner’s incarceration came at a time of heightened tensions between Russia and the US over the Russian invasion of Ukraine, and US President Joe Biden’s administration has said she is being “wrongfully detained”. Moscow has denied any political element to the case.
Amid suggestions Griner could be exchanged for a Russian citizen jailed in the US, a Russian deputy foreign minister said last week that the “hype” surrounding her case was not helpful.
The Biden administration has previously said it is working to bring Griner and another American, Michigan corporate security executive Paul Whelan, home from Russia, and that their cases remain priorities.
Earlier this month, Griner appealed directly to Biden in a letter, asking him to do everything in his power to secure her return to the US. “I still have so much good to do with my freedom that you can help restore,” she wrote.
“I miss my wife! I miss my family! I miss my teammates! It kills me to know they are suffering so much right now. I am grateful for whatever you can do at this moment to get me home.”
Meanwhile, Blagovolina said the defence was pleased with the latest court session on Thursday.
“It was an extremely emotional day for Brittney, who was touched by the appearance of the club director, head physician and her teammate, who gave an extremely positive description of our client both personally and professionally,” she told the Reuters news agency.
Chima Ugo is a patriotic Nigerian, a journalist, blogger and singer who is so much interested in the internet, journalism, and blogging and have been for half a decade.