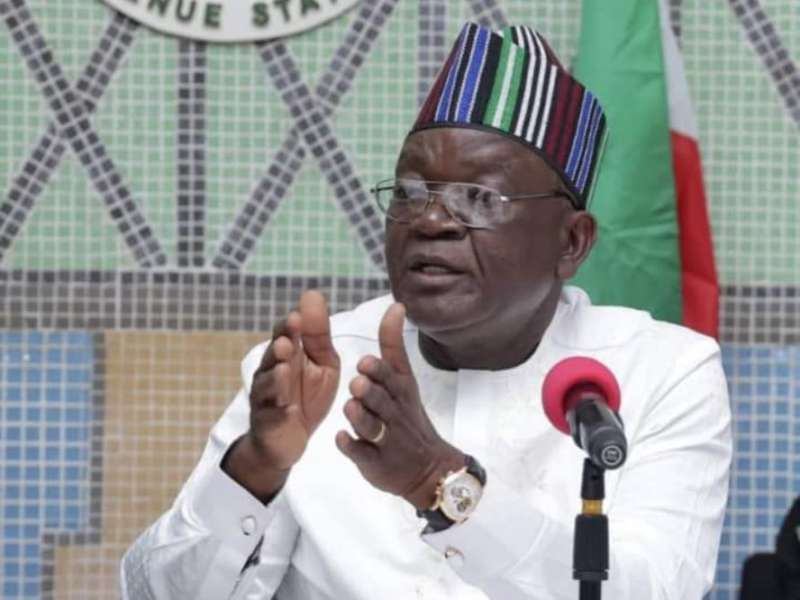 Governor Samuel Ortom of Benue state has said that the recently circulated video showing bandits whipping the kidnapped victims of the Abuja train attack and the threat by the bandits to kidnap President Muhammadu Buhari and other government functionaries were clear indications that there is no government in Nigeria.
The Governor lamented that the All Progressives Congress, APC, led Federal Government had plunged Nigerians into unimaginable suffering saying that the economic and social life of Nigerians as well as the security of the people had all collapsed under the watch of the government.
The Governor who spoke Monday while addressing an expanded Peoples Democratic Party, PDP, stakeholders meeting in Makurdi observed that “today bandits are threatening to kidnap our President and others and we are all relaxed.
“If they can threatening our Predident who is safe? I had raised the alarm before now warning that if we do not take decisive action against these bandits and terrorists they might one day attack the seat of power like it happened in Afghanistan and they resorted to abusing me. But we all can see what is happening now.
“We must note that ISWAP, Boko Haram, ISIS and Fulani herdsmen are all the same thing and they are being sponsored, let no one deceive us.
“How can you explain to me that the Federal Government does not have the might to tackle these terrorists. I saw the video of how the abducted train passengers including women and children were being whipped and I wept. What is their sin? This should not be happening in my generation. What is happening to our country?
“Are you telling me that there is no military or security agencies to rescue these people? Where has this type of thing happened in the entire world? In America they will not allow their own to remain in the hands of kidnappers just as they did in Niger, they went and rescued their own, why can’t we do the same thing for our own people?
“And somebody will tell me that there is a government in this country. There is no government in Nigeria today. Those people who are deceiving the President that he is doing well are all criminals.
“They are deceiving him; the President must know that all is not well and he is not doing well as the President of Nigeria.
The President is not living up to the oath of office he took when he was assuming office as President.
“The President must know that Nigerians are not happy, Nigerians are crying, Nigerians are in pains, Nigerians are suffering. The economy, security and the social life of our people have all gone down the drain.
“Nigerians are now praying that if it were possible, this government should take us back to the 2015 era and Nigerians will be happier.
“Truly this government has taken Nigerians from top to bottom, but instead of leaving us at the bottom the graves of the people are being dug with this unending insecurity which is claiming the lives of the people.
“I know that I would be insulted for saying the truth, but I will continue to say the truth. You must give Nigerians genuine change to make life better for the citizens of our dear country Nigeria that is the only time I will stop talking.”