Sri Lankans rejoice as the president steps down 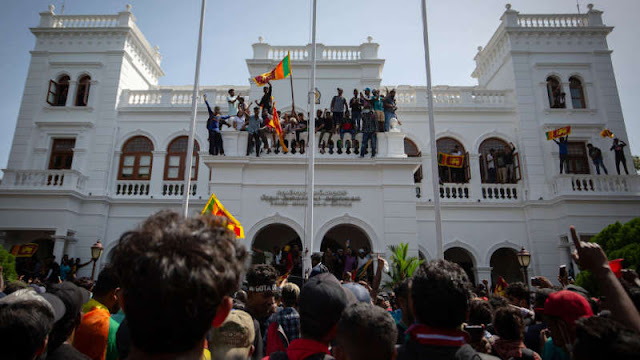 Embattled Gotabaya Rajapaksa, the president of Sri Lanka, handed in his letter of resignation via email from Singapore yesterday, according to a representative for the speaker of the house.
In the midst of widespread protests over an economic collapse at home, Rajapaksa escaped to Singapore through the Maldives.
Joyous celebrations were sparked in Colombo, the troubled nation's commercial metropolis, where protestors gathered outside the presidential secretariat and disobeyed a curfew imposed on the entire city.
At the Gota Go Gama protest site, which was mockingly named after Rajapaksa's first name, crowds lit firecrackers, screamed slogans, and danced wildly.
“The whole country will celebrate today,” activist Damitha Abeyrathne said.

“It’s a big victory. We never thought we would get this country free from them,” she added, referring to the Rajapaksa family, who dominated the South Asian country’s politics for two decades.

According to the Speaker's spokeswoman, Rajapaksa submitted his resignation via email late yesterday. It will become official today after the document has been legally validated.
They stated that the resignation would be officially announced at 7:30 this morning, local time.
A source with knowledge of the issue claims that Rajapaksa fled to the Maldives on Wednesday. Then, he took a Saudi Arabian Airlines trip yesterday to Singapore.
Rajapaksa was received by a number of security officers and was observed leaving the airport VIP area in a procession of black vehicles, according to a passenger on the flight who declined to be identified but spoke to Reuters.
The President, who was wearing all black and traveled in business class with his wife and two bodyguards, was described as "quiet" and "friendly" by airline personnel who were on the aircraft, according to Reuters.
According to Singapore's Foreign Ministry, Rajapaksa arrived on a private visit and neither requested nor received asylum.
The precise location of Rajapaksa's ultimate travels was not immediately known. Officials from the Maldives first said he intended to continue on to Saudi Arabia, but they afterwards could only confirm his initial stop in Singapore.
More protests broke out on Wednesday after Rajapaksa appointed his ally, Prime Minister Ranil Wickremesinghe, as interim president. Protesters stormed the parliament and the Premier's office, demanding that he step down as well.
Protesters were leaving the presidential palace after occupying it over the weekend, and the government had earlier issued a curfew in the city and suburbs of Colombo that would last until 5am today.
Chima Ugo is a patriotic Nigerian, a journalist, blogger and singer who is so much interested in the internet, journalism, and blogging and have been for half a decade.