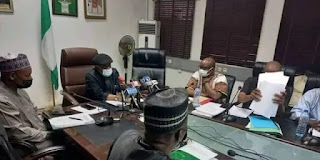 President Muhammadu Buhari has been encouraged by the Academic Staff Union of Universities (ASUU) to meet with the Prof. Nimi Briggs-led Committee on Negotiation.

Prof. Emmanuel Osekede, the president of ASUU, made this statement during an interview with the News Agency of Nigeria (NAN) on Tuesday in Abuja.

According to NAN, the Federal Government's Briggs committee, which was established on June 7, is renegotiating the 2009 Agreement with ASUU and would deliver its findings to Education Minister Malam Adamu Adamu in three months.

Additionally, according to NAN, Buhari stated that "really, enough is enough for keeping pupils at home" in a statement made by Malam Garba Shehu, the Senior Special Assistant to the President on Media and Publicity.

I don't understand why Mr. President declared "enough is enough" since we are not the ones keeping the students at home late, Osedeke added.

"We have concluded the negotiations with the delegation the federal government appointed to represent it. Instead of getting in touch with us again to provide an update on the meeting, we are hearing this."

"What does this mean if you set up a committee to negotiate on your behalf, and the committee has completed its work and submitted the documentation to you for signature?," he enquired.

In addition to meeting the negotiating teams, he urged Buhari to sign the report.

Additionally, it must negotiate and recommend any other matter the Committee deems pertinent to reposition the NUC for global competitiveness; it must also submit proposed draft agreements within three months of the date of inauguration. The 2009 Agreements with other university-based unions must also be renegotiated in realistic and workable terms.

According to NAN, the federal government failed to meet some of the demands made by ASUU and other unions in the education sector, including the release of funds for university revitalization, renegotiation of the 2009 FGN/ASUU agreement, release of earned allowances for university lecturers, and implementation of the University Transparency and Accountability Solution.

The committee is presided over by Brigs, pro-Chancellor of Alex Ekweme Federal University in Ebonyi.