Strike: "NGIGE Is Busy Abusing His Colleagues Instead of Solving the Problem" - ASUU President. 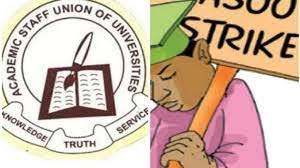 On Thursday, Dr. Chris Ngige, Minister of Labour and Employment, came under fire from Professor Emmanuel Osodeke, President of the Academic Staff Union of Universities (ASUU), for his attitude on the strike that university lecturers are currently on.

Professor Olu Obafemi, Senator Chris Adighije, and Professor Nimi Briggs have all had their character completely insulted by what the Minister of Labour has done, according to Professor Osodeke, who appeared on Sunrise Daily.

Instead of attempting to fix the issue, the minister is busy insulting his colleagues, including the minister of education.

The president of ASUU's remarks are the most recent development in the deadlock between the federal government and the union about the strike that has kept university students at home since February 14.

The Minister of Labor and Employment and the union have occasionally engaged in verbal combat in the months since the strike started, but efforts to end it, including student protests, have been unsuccessful.

Now both parties are claiming the other has been given false information.

In a statement released on Wednesday, Dr. Ngige claimed that there was no CBA between the Federal Government and ASUU.

"This clarification has become necessary in light of the deluge of deliberate misinformation being dished out to Nigerians by the President of ASUU, Professor Osodeke, as well as his branch leaders, calling on President Buhari to sign an agreement which they claimed to have reached with the Federal Government," a statement by the ministry's spokesperson, Olajide Oshundun said.

"It is very unfortunate that we have reached this point when our kids are crying at home and the labor minister is busy spreading false information and misleading the public in an effort to discredit ASUU," he added.

He pressed Dr. Ngige to provide evidence to back up his allegations that members of the ASUU stormed out on his delegation during a meeting with them.

The ASUU President claimed that after failing to persuade the striking members to end the strike by withholding their pay for five months, Ngige resorted to spreading false information.

ASUU began taking part in industrial action on February 14, 2022, accusing the Federal Government of failing to meet its objectives.

ASUU-FGN 2009 agreement renegotiation, the implementation of the University Transparency Accountability System for the payment of academics' salaries and benefits, and the release of the white paper report of the visitation panels to institutions are only a few of the demands.

Even as they insisted that the industrial action would end once their agreements were satisfied, the government was forced to stop paying the wages of the lecturers who were on strike.

It is intolerable, according to Mathew Kukah, the Catholic Bishop of Sokoto Diocese, that Nigerian universities are still closed after such a long period of time.

At the signing of a peace agreement for the Osun State governorship election, Bishop Kukah declared, "This is unacceptable, especially given that these things are taking place in a democracy.