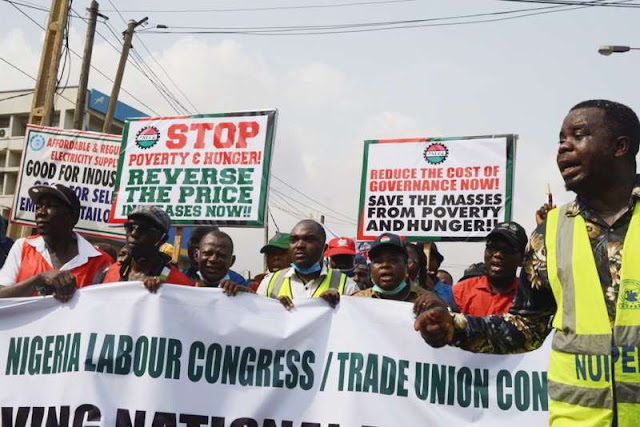 According to the Nigeria Labour Congress (NLC) and the Joint Action Committee, which consists of the Senior Staff Association of Nigerian Universities and the Non-Academic Staff Union (NASU) of Educational and Allied Institutions, the planned protest in support of the Academic Staff Union of Universities (ASUU) will go ahead as scheduled.
The labour unions insisted that their protest in support of ASUU over its six-month-old strike will take place on July 26 and 27, denying that they were aware of any security report from the Department of State Services that warned against the rally.
ASUU had started a nationwide strike on February 14, 2022, in protest of the federal government's inability to uphold the 2009 deal it had made with the union. The University Transparency and Accountability Solution has been adopted as the preferred payment platform for the university system, and the payment of earned academic allowances to lecturers are among the topics under dispute. The disbursement of the revitalization fund for universities has been delayed.
The strike has continued longer than expected despite numerous discussions between the union and the Federal Government, which prompted the NLC to step in.
Remember that the NLC had no disagreement with the government when Lai Mohammed, the Minister of Information and Culture, deemed the planned statewide protest illegal on Wednesday.
Also on Thursday, Dr. Chris Ngige, the minister of labour and employment, issued a warning against the protest after learning from the DSS that the gathering might be taken over by criminals.
Benson Upah, Head of Information and Public Affairs of the NLC, responded to Ngige Friday in an interview by saying that the congress was unaware of any security report by the DSS.
He added that the union's demonstrations were always peaceful and that attendees had always behaved peacefully, noting that the rally was a symbolic act to persuade the government to end the five-month ASUU strike.
He stated that security would be expected during the drill and that the police were aware of the demonstration.
He said, “First and foremost, none of our rallies have ever been associated with violence; Nigerians can attest to that. We have always been peaceful; we will ensure we are not implicated. We will carry out our duty as usual.

“I’m not aware of any directive sent to us but I heard the Minister of Labour and Employment saying an advisory came to him, but this will not be the first time such an advisory will be issued.

“Left for the DSS, we will not hold any peaceful rally in this country. At the peak of Boko Haram attacks in Abuja we had our rally. All the rallies were peaceful. I think that is a testimony to our patriotic intention, our organisational capability, our vigilance and the voice of appreciation from Nigerians and we appreciate all of that. We have been able to conduct ourselves reasonably well.”

The NLC spokesperson clarified that the organised labour was not going on strike action but a rally where labour leaders would speak on the issues at stake.

He added, “Let us also take note of the fact that this is not a strike action but a peaceful rally. It’s a symbolic gesture so people should understand and know the difference. The police are welcomed. When we are holding rallies like this, we invite the police, not to seek their permission, because the law says we don’t need their permission and that we have been automatically granted the permission.”
Chima Ugo is a patriotic Nigerian, a journalist, blogger and singer who is so much interested in the internet, journalism, and blogging and have been for half a decade.