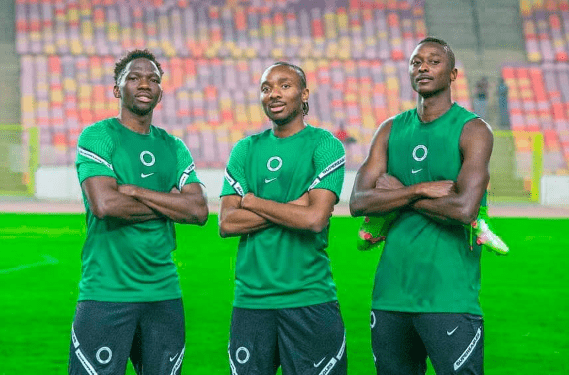 Despite interest from a number of European teams in the Nigerian international's services, there are more and more signs that he may stay in Andalusia.
Umar Sadiq, a striker for the Super Eagles, arrived back at UD Almeria on Tuesday, July 12, to join his teammates in training for the upcoming 2022–23 season.
Four days ago (on Saturday), Almeria began their preseason preparations, but Sadiq was not present because he had been given a long rest for his efforts with Nigeria.

Early in June, the Super Eagles thrashed Sao Tome and Principe 10-0 and Sierra Leone 2-1 in their respective 2023 Africa Cup of Nations qualifying matches. The 24-year-old striker was a member of both teams.
Sadiq worked out in the gym by himself on his first day back with the Rojiblancos, apart from the other team players. He is, however, anticipated to soon join the entire team session.

However, his ongoing presence at Almeria once the summer transfer market closes is not assured.

Sadiq is currently one of the hottest commodities in Spanish football after his fantastic two-year stint with Almeria.

Sevilla and Real Betis have been keeping an eye on the former AS Roma star for a time, despite Almeria's insistence that their prized asset will not leave the Mediterranean Games Stadium on the cheap.

Recently, Real Sociedad and Villarreal entered the race for Sadiq. It won't take long for a team to fork over the €20 million required to entice Almeria to cooperate.

Although there are teams outside of Spain that are interested, such as Ajax and Benfica, Sadiq is thought to be keen on competing in the Spanish La Liga in 2019.

Last season, Sadiq led Almeria to promotion to La Liga with his 18 league goals, including the important equaliser against Leganes in the season finale.