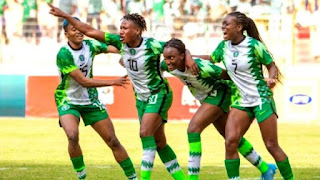 On Thursday, the Super Falcons of Nigeria defeated the Cameroon 1-0 in Morocco's Stade Mohammed V.

The Super Falcons will participate in the FIFA Women's World Cup in 2023 thanks to the victory.

The two teams initially shown a passion and hunger to attack and score as soon as possible.

Ange Bawou, the goalkeeper for Cameroon, made a good save on Francisca Ordega's low cross nine minutes in.

Ngozi Okeoghene's corner reached Ashleigh Plumptre's head in the 24th minute, but Bawou made the save.

Ifeoma Onumonu forced Bawou to make another save as the Super Falcons continued to bombard the Cameroonian team.

Both Rasheedat Ajibade and Christy Ucheibe missed opportunities to score the game's opening goal, which resulted in a scoreless first half.

Ajibade's outstanding header gave the Super Falcons a goal twelve minutes into the second half.

Seven minutes after the hour, the experienced Aboudi should have equalized for the Indomitable Lionesses, but her attempt missed the target.

With five minutes remaining, Onumonu, a forward residing in the US, received a great pass over the Cameroon backline, but he misfired the ball wide.

Cameroon had a few late runs, but Super Falcons held on to win 1-0.