The Russian ambassador to London: The war in Ukraine will be longer if the UK Keeps Supplying President Zelenskyy's forces with weapons. 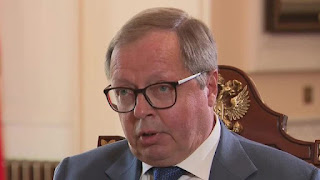 According to the Russian ambassador to London, if the UK keeps arming President Zelenskyy's army, the war in Ukraine would last longer.

According to Andrei Kelin, citizens in the Donbas region of eastern Ukraine are now being shelled with weaponry that were provided by the UK, according to Sky's Dermot Murnaghan.

Because the UK will realize there is no chance of defeating Russia, the battle will stop and may conclude rather quickly, he predicted.

If the UK continues to provide weaponry, which are now now being used to shell cities and civilians in the Donbas and other locations, the conflict will last longer.

And the longer the fight is continued by Ukrainian authorities, the more weapons the UK will provide.

More than 20 long-range 155mm calibre weapons were purchased by Britain from a Belgian armaments company in June, according to Defence Secretary Ben Wallace, although it is unknown if they have been delivered or are in action in Ukraine.

A number of rocket launchers and short-range missile systems will also be sent, he and other defense ministers have acknowledged, and Ukrainian soldiers have been trained in the UK to use a variety of weapons.

However, Prime9jaOnlineMedia has not received any independent proof that any of the given weapons have caused the deaths of civilians.

When the new UK government is created with the election of a new Conservative leader, Mr. Kelin said it should adopt a realistic approach to its policy toward Ukraine since "the conflict will not continue forever."

He insisted that he just expressed what he knew "at that moment," and he denied lying when he informed the media in January that Russia has no plans to attack Ukraine.

Boris Johnson, the UK prime minister, was criticized by him for his unwavering backing of the Ukrainian government's efforts to repel the Russian invasion.

He remarked, "The events taking place there are being miscalculated strategically because... Fast and consistently, Russia is winning.

"The UK is attempting to provide weaponry to Ukraine, but the more time it takes, the more Ukraine will suffer.

"It is clearly obvious that in the Donbas, [we] are making progress while Ukraine is losing ground. What the UK government's exit plan will be if it continues to insist that Ukraine should win intrigues me. It's just not realistic."

When questioned about the war crimes that several Conservative leadership candidates had previously accused Russia of perpetrating, he responded that war crimes had really been executed by Ukraine.

He went on: "We first and foremost have a list of the crimes that were done over the eight years that Ukrainians bombed Donbas, shelled innocent residents there, and killed law abiding civilians.

"And they continue to do the same now… in Donbas specifically. There are eight years of it. We will apply based on the record we have.

"Ukrainian crimes that were done during, after, and during the civil war are well documented by us."

Despite this, more than 40 judicial agencies from the US and Europe decided to work together on an inquiry into alleged Russian war crimes in Ukraine on Thursday.

He claimed it was Ukraine's duty to clear the mines obstructing the shipments, which were the cause of ships being unable to access Black Sea ports as a result of the Russian blockade.

He made them when Russia, Ukraine, Turkey, and the UN were negotiating a deal to allow Ukraine to resume grain exports.

Mr. Kelin expressed his confidence that an agreement would be reached to let grain shipments pass.

The merchant ships will be escorted, in my opinion. This is currently up for negotiation, but most likely [the] Turks will participate. We are creating a control center for this right now in Turkey."

When asked if Russia would weaponize its gas shipments to Europe in the fall, Mr. Kelin responded that the EU had made the decision to lessen its reliance on Russian gas, not the Kremlin.

Fears are mounting that Europe's persistent gas shortages may cause a severe recession, which is already showing its first indications.

He stated: "The European Union stated that they would completely reduce their consumption of gas, oil, and energy from Russia by the year 2030 and end it by this year.

"As a result, they gradually cut back on their use of our energy sources.

"Naturally, we now want to fulfill all of our contracts. We already have a good reputation as a dependable supplier, and we'll keep up that reputation. However, since they will be reducing it by the time we identify suitable alternatives, we should likewise take action to do so."

Despite this, on Thursday, more than 40 US and European judicial authorities agreed to coordinate investigations into suspected Russian war crimes in Ukraine.

On the issue of ships being unable to reach Black Sea ports due to the Russian blockade, he said it was Ukraine's responsibility to remove the mines that were preventing the shipments getting through.

His comments came as Russia, Ukraine, Turkey and the United Nations worked on a deal aimed at resuming Ukraine's grain exports.

Mr Kelin said he was confident a deal would be done to allow grain ships to get through.

He said: "The merchant ships will be escorted, I do think, and this now on the negotiation table, but probably [the] Turks will take part in it. We are establishing a control centre in Turkey right now for this."