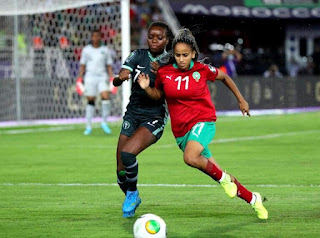 Despite a fantastic effort, the West Africans were defeated by the hosts and thus failed to advance to the final of the African football showpiece.

Morocco qualified for the 2022 Women's Africa Cup of Nations final after defeating Nigeria on penalties.

With the score tied 1-1 after 120 minutes, the North Africans prevailed on penalties over the reigning African champions. They will now compete in the final against South Africa on Friday.

The Lionesses of Atlas started the game on a rampage, dominating ball possession while the Super Falcons were forced to defend at the Prince Moulay Abdellah Stadium in Rabat.

Ghizlane Chhiri headed Ghizlane Chebbak's cross over the bar as the North Africans had the first chance to score. Ngozi Okobi, on the other hand, took advantage of a nice pass from Halimatu Ayinde but shot wide.

Okobi set up Ifeoma Onumonu 12 minutes into the game, but the ball was cleared away by Levante star Yasmin Mrabet before the Gotham FC star could shoot from close range.

Three minutes later, Onumonu had another chance to put Randy Waldrum's team ahead, but this time Nesryne El Chad was well positioned to stop her.

Nigeria had a penalty appeal turned down by referee Maria Rivet three minutes before halftime after Ajibade was fouled in the box by Hanane El Haj.

Reynald Pedros' continued from where they left off in the first 45 minutes in the second half. Unfortunately, the Falcons were reduced to ten players after enterprising Ayinde was sent off for a dangerous tackle on Rosella Ayane.

The Atlas Lionesses nearly capitalized on Nigeria's numerical disadvantage, with Ashleigh Plumptre forced to make a timely goal-line clearance after Onome Ebi's shot was heading for her own net.

That lead lasted four minutes before Sanaa Mssoudy equalized for the home team. Annie's save by goalkeeper Chiamaka Nnadozie fell into the path of the ASFAR forward, who slotted the ball into an empty net.

Morocco completely dominated the game, but their major flaw was failing to convert several begging chances that came their way, despite the brilliance of women's player of the match Nnadozie.

With nothing separating the two teams after extra time, penalty kicks were used to determine the winner.

Morocco won the subsequent kicks, as Onumonu's shot was saved by Er-Rmichi resulting in 5-4 scoreline.