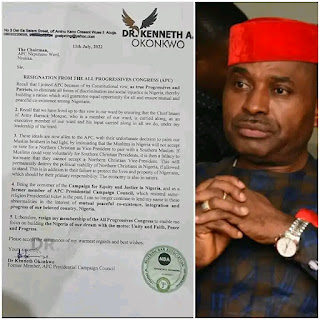 As a result of Kashim Shettima's selection as Bola Tinubu's running mate for president by the All Progressives Congress, Nollywood actor Kenneth Okonkwo has resigned from the party.

In a letter posted on his Instagram page on Monday, he made this revelation.

Remember that you joined the APC because of its constitutional pledge to do away with all forms of prejudice and social injustice in Nigeria as true Progressives and Patriots, according to a portion of the letter that reads,

"Those beliefs are no longer shared by the APC, which made the terrible decision to disparage our Muslim brothers by implying that Nigerian Muslims will neither support or vote for a Northern Christian to serve as Vice President alongside a Southern Muslim. It is false to suggest that Muslims cannot support a Northern Christian Vice-President if they can vote voluntarily for Southern Christian presidents. If this is allowed to prevail, it will irrevocably undermine Northern Christians' political viability in Nigeria."