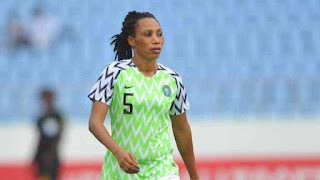 Onome Ebi, the captain of the Super Falcons, is looking forward to a challenging matchup against Cameroon in the 2022 Women's Africa Cup of Nations quarterfinal.

On Thursday, the two footballing behemoths of Africa will square off in Casablanca at the Stade Mohamed V.

The Super Falcons had a sluggish start to their title defense in Morocco, losing to rivals Banyana Banyana of South Africa by a score of 2-1.

However, Randy Waldrum's team recovered and won their following two matches against Botswana and Burundi.

On the other side, Cameroon drew their opening two games against Zambia and Togo before moving on to the quarterfinals with a victory over Tunisia.

The last time these two sides faced off was in the WAFCON semi-final in Ghana four years ago, where the Super Falcons won on penalties against the Indomitable Lioness.

The holders of the title, according to Ebi, are ready for another challenge.

We are aware of what to expect, of course. Cameroonians are also interested in attending the World Cup. Nevertheless, we have never missed the World Cup, and we won't start doing so now, the seasoned defender told thenff.com.

"Once Australia & New Zealand have our complete attention, we can start talking about the trophy."