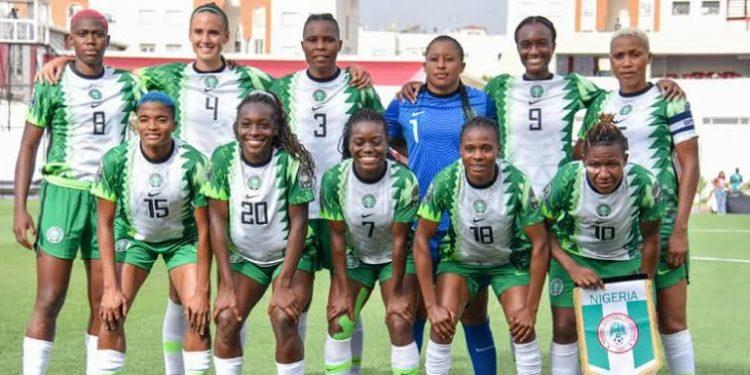 The Lionesses take against the Super Falcons on Thursday, but the nine-time African champs are unfazed.
Michelle Alozie, a forward for the Super Falcons, is upbeat about Thursday's match between Nigeria and the Lionesses of Cameroon.
For a place in the 2022 Women's Africa Cup of Nations semifinals, the nine-time African champions face Cameroon. Any side that wins would also be guaranteed a spot in the World Cup later this year in Australia or New Zealand.
In the WAFCON, Nigeria has a strong record against the Cameroonians, defeating them in four of the previous five games. However, there hasn't been much in this year's WAFCON to distinguish either side from their preferred style of play.
The Super Falcons won their last two games in a domineering fashion after their opening day loss to South Africa. While in group B, Cameroon had to grind out a 2-0 victory against Tunisia to finish on five points and secure a place in the knockout rounds.

Houston Dash forward Alozie acknowledges that the Lionesses could be dangerous, but she believes that the Super Falcons have what it takes to prevail.

“We’ve played Cameroon at the WAFCON a few times, and they are a good team,” Alozie told Nigeria info FM.

“But as this tournament has been progressing, we’ve just continued to get better and better as a team and we’ve bettered our game model.

“So it will be a good battle, and we are excited, we are set for it, and we can’t just wait for it.

“I’m really excited for how we look going into this game. I’m not looking down on Cameroon, but they are a really good team. But I’m really confident.
Chima Ugo is a patriotic Nigerian, a journalist, blogger and singer who is so much interested in the internet, journalism, and blogging and have been for half a decade.