War in Ukraine: Displays of Russian military weaponry in Prague. 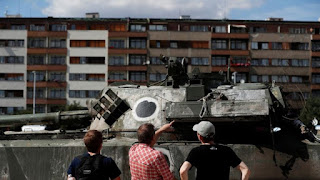 The Czech capital of Prague is now hosting a showcase of Russian military equipment that was held captive by the Ukrainian armed forces.

On Letna Plain, a sizable open area close to Prague Castle, the display of war memorabilia was unveiled. It includes a damaged T-90 tank, a Buk air defense system, and a Msta howitzer.

After the show debuted, Ukraine's Minister of Internal Affairs Denys Monastyrsky sent an email to the BBC saying, "This exhibition proves how crucial help from partner countries is to us."

"Russian propaganda enjoys scaring people by claiming that their tanks could eventually arrive in Prague, Berlin, or Paris. Ukrainians only display their protest through scrap, "he said.

The show, which was put on by his ministry, also includes defused rockets and shells that have been falling on Ukrainian cities since Russia's conflict against that nation started in February.

Tetiana Okopna, a spokesperson for the Ukrainian embassy, told Czech Television that the exhibition aims to "highlight once more the horrors of war that Russia's aggression has brought to Ukraine."

She said, "But we also want to highlight how Czech weapons are used," saying that a similar exhibition was just opening in Warsaw and that there were further ones scheduled for Germany and the Netherlands.

Alongside Mr. Monastyrsky were the mayor of Prague, Zdenek Hrib, the European Commissioner, Ylva Johansson, and his Czech colleague, Vit Rakusan.

The audience of spectators gathered for the exhibition was informed by Ms. Johansson that "Millions of Ukrainians have been forced to flee Russia's assault."

"I humbly acknowledge the outstanding compassion Czechs have demonstrated toward Ukrainian refugees. Your actions are an inspiration to the rest of Europe, not just here in Prague "she added.

Yevhen Perebyinis, the outgoing ambassador from Ukraine, was instrumental in gaining political and public support for his nation in the Czech Republic.

Early in the fighting, the Czech defense ministry and the Ukrainian embassy collaborated to start a crowdsourcing initiative to raise money to purchase Czech weapons for the Ukrainian army. Over €50 million (£42 million) have been raised.

Meanwhile, one of Ukraine's first and most ardent backers has been the Czech government.

T-72 main battle tanks from the Czech Army's active reserve were the first tanks to be sent to Ukraine. Since then, further heavy weapons have been supplied, including Mi-24 helicopters.

The transfers, which consist of a mix of gifts and weaponry purchases, are unclear strategically. The Czech defense ministry maintained what amounted to a diplomatic silence even after US Defense Secretary Lloyd Austin publicly thanked Prague for providing its Mi-24s to Kyiv.

Following their deployment to the battlefield, images of the helicopters sporting Ukrainian markings have since surfaced on open-source intelligence websites on Twitter.

Although Czechs continue to support Ukraine strongly, others are concerned about the ripple impact of rising energy and food prices brought on in part by the conflict. There are worries that enthusiasm in the conflict may eventually wane both here in the Czech Republic and throughout Europe.

Not one of them is Mr. Monastyrsky.

The minister told the BBC, "We are not scared that Europe would lose interest in us.

"We worry that more people may perish as a result of assassinations committed by Russian military, missile attacks, mine explosions, collapsing buildings, or a shortage of food.

"In order to achieve peace and sustainable growth, the world must eradicate Russian aggression, which is the root of all the current issues. For the Ukrainian, it must be political exile, economic sanctions, and weaponry.