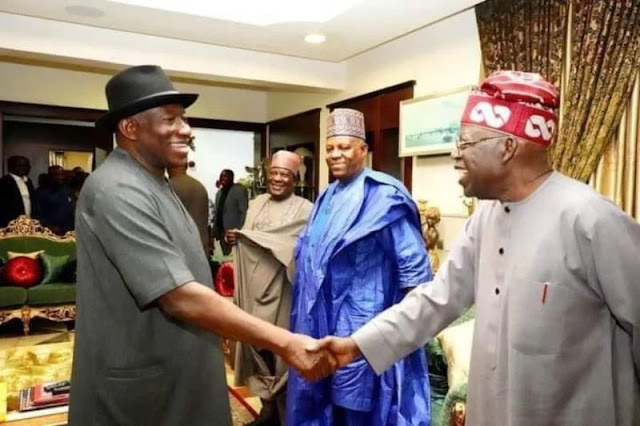 As the general elections in 2023 approach, Asiwaju Bola Tinubu, the All Progressives Congress (APC) presidential candidate, paid a visit to former President Goodluck Jonathan on Tuesday night in his Abuja home.
The brief discussion, which took place behind closed doors, was reportedly a part of Tinubu's nationwide outreach with important stakeholders before the next elections.
Along with Kashim Shettima, Tinubu's running mate, the governors of Kwara State, Bello Matawalle of Zamfara, Abubakar Badaru of Jigawa, Dapo Abiodun of Ogun State, Bello Matawalle of Zamfara, Bello Matawalle of Zamfara, and Plateau State were also present. Simon Lalong, the director general of the Tinubu/Shettima Campaign Organization,
Tinubu’s closed-door meeting with Jonathan came on the heels of his earlier visit to former President Olusegun Obasanjo in Abeokuta, Ogun State.

Although, the details of the meeting were not made public, but it can not be unconnected to the 2023 presidential elections.

Rising from the meeting, the former Lagos State Governor simply said he told Jonthan of his presidential ambition and seek the support of his host.

According to a source in Tinubu’s camp, the visit was an extension of the APC national leader’s consultation with major stakeholders in the polity ahead of the 2023 presidential election.

He further noted that the former president was elated to see them and open to consultation on the APC presidential candidate’s ambition.

He said, “His visit to Jonathan shouldn’t come to anyone as a surprise. Tinubu holds no grudges with any political leader whether within the party or in the opposition.”