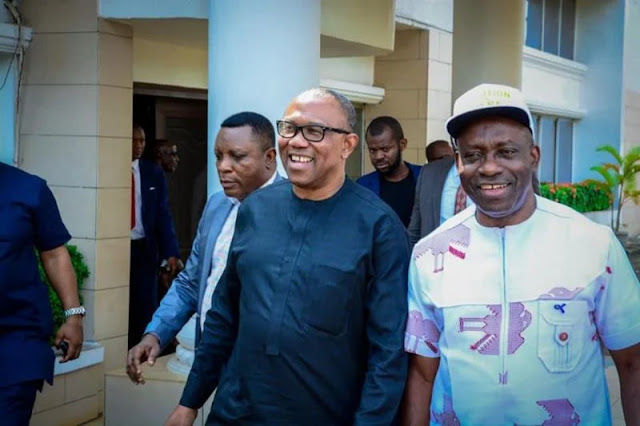 Peter Obi, a former governor of Anambra State and the Labour Party's (LP) presidential candidate, met yesterday with Professor Chukwuma Soludo, the state's current governor, at the Governor's Lodge in Awka.
Although specifics of their conversation were not made public, it was assumed that they may have discussed the general elections in 2023.
Obi belongs to the LP, whilst Soludo is a part of the APGA, the All Progressives Grand Alliance.
Obi had previously been to Paul University in Awka, the site of the national Evangelical Fellowship in the Anglican Communion, or EFAC, convention.
In order to not disturb the meditative crowd, the LP presidential standard bearer entered the convention centre silently. However, when Bishop Samuel Ezeofor, the national chairman of EFAC, noticed him, he persuaded Obi to address the group.
The LP presidential candidate's presence was announced, sending the crowd into a frenzy as they rushed forward to catch a look of him.
The 9000 participants from the 36 states and the federal capital territory of Abuja who had registered were addressed by Obi, who urged them to continue in their prayers because Nigeria is going through a difficult time.
He said: “People are suffering and we need your prayers as we go into next year’s elections.

“In that election, I plead with you not to look at where the candidates come from while casting your votes. It is however necessary for you to ask questions about the candidates and what they are claiming and whether they are prepared to serve the country because if you fail to do that, the country will continue to have problems.”

The Archbishop, Metropolitan and Primate, Church of Nigeria, Most Rev Henry Ndukuba said the national convention came at the right time when Nigeria was in serious crisis.

Describing EFAC as an indispensable part of the church, the Primate urged Christians not to compromise their faith.
Chima Ugo is a patriotic Nigerian, a journalist, blogger and singer who is so much interested in the internet, journalism, and blogging and have been for half a decade.