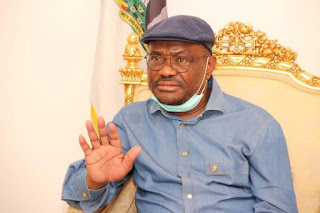 Governor Nyesom Wike of Rivers State has announced that he will soon name dubious candidates vying for the presidency of Nigeria in 2023.

According to media reports, Wike, a top member of the Peoples Democratic Party (PDP), spoke on Monday at the official start of the construction of internal roads at Rumuesara, Eneka town in Rivers State's Obio/Akpor Local Government Area (LGAThe Eneka internal roads are 5.3 kilometers long, with drains on both sides that are 9 kilometers long, and are expected to be completed in five months.

"Some other people are busy putting plans in place to take over leadership in Nigeria in order to loot the remaining ones that these other people have already kept.

I am privileged to know these people, and I will tell you who they are when the time comes. You must be aware of what is going on in Nigeria. Ignore all the people running around claiming to want to rescue or save you. Just keep an eye on what happens next."