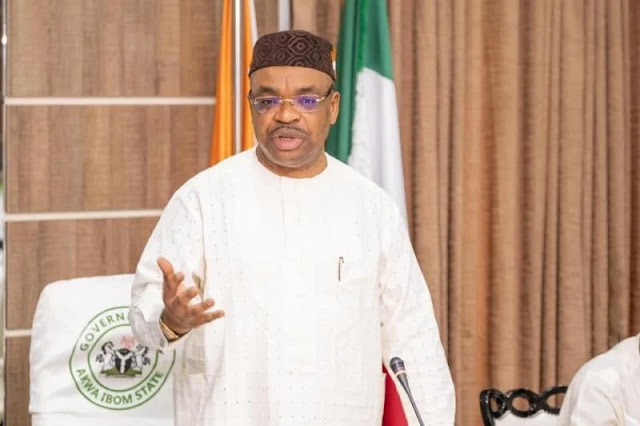 The suggestion that the Akwa Ibom State Governor, Mr. Udom Emmanuel, is ordering a security crackdown on opposition voices in the state has been criticised by several of his aides as being without foundation.
The governor's advisers voiced concern that the calm and accepting nature of the governor has sparked a variety of smear campaigns against him and his administration.
The Special Assistant to the Governor on Research and Documentation, Mr. Essien Ndueso, briefed journalists in Uyo and specifically mentioned a plot by convicted human rights lawyer, Inibehe Effiong, to use tactics to delay justice on the defamation suit brought by Governor Udom Emmanuel against his client, Barr. Leo Ekpenyong.
Ndueso addressed the press conference with his counterpart on Project Monitoring, Joseph Okon, and that of Project Monitoring, Ernest Akpan in attendance.

Making reference to Inibehe’s conduct at the court which earned him a jail term, the Governor’s aides opined that the action of Barrister Femi Falana (SAN) and his colleagues do not mean well for Barr. Inibehe Effiong, else they would have tutored him on how a lawyer should conduct himself in the court.

The aides said they are counting days for the convicted lawyer, Inibehe Effiong to exhaust his sentence so that the substantive case of defamation against Leo Ekpenyong instituted by Governor Udom Emmanuel against him could resume in court.

The aides also advised Inibehe and his client against further deliberate delay of justice on the matter.

Describing the court case instituted by Falana and others against the Chief Judge of Akwa Ibom State as ill-motivated, maintained that the court case won’t prevent justice from being done on the matter.

“The suit is a wrong gospel by Femi Falana, SAN and his twelve disciples. Such wrong gospel cannot win any legal soul in their favour and that of their drowning client, Mr Inibehe Effiong. All we want is that justice should be served, and timely too. We are waiting patiently.

“Today, it is quite sad and embarrassing that the plot by convicted lawyer Inibehe Effiong through outdated tactics to delay justice on the defamation suit against Barr Leo Ekpenyong can receive the signatures of 13 lawyers in the guise of suing the Chief Judge of Akwa Ibom State, His Lordship, Justice Ekaette Obot over a demand that is purely administrative.

“It is evident that Femi Falana, SAN, and his co-lawyers do not mean well for Barrister Inibehe Effiong. Otherwise, they would have been more concerned about teaching him how the court works outside Facebook and other social media where his legal practice flourishes more to the point that he was already assuming the status of a self-appointed solicitor general on Facebook.

“It was this illusion that blinded him into daring a legitimate law court presided over by a State Chief Judge.

“The peaceable and tolerant disposition of Governor Udom Emmanuel has propelled all manners of insidious calumnious campaigns against his person and his government.

“For example, the allegation that the Governor is ordering the security clampdown on dissenting voices is very baseless and rather laughable.

“But that itself can best be answered by the court of public opinion, where every member of the public can see in Mr Emmanuel, a transparent and accommodating leader who has eschewed political bias in his administration of the State.

“This perhaps explains why a lawyer, Leo Ekpenyong, could throw caution to the wing and go all out to attack the personality of the Governor, accusing him of bribing some judges to secure judgement in 2019 in favour of Senator Chris Ekpenyong who had defeated Senator Godswill Akpabio.”, the governor’s aids stated.
Chima Ugo is a patriotic Nigerian, a journalist, blogger and singer who is so much interested in the internet, journalism, and blogging and have been for half a decade.