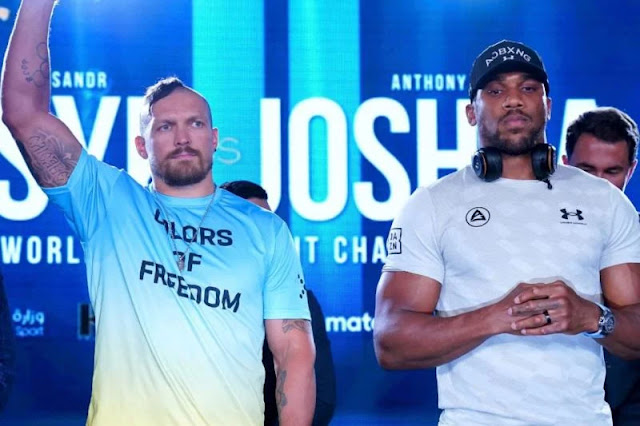 In preparation for their rematch for the world championship in Saudi Arabia, British boxer Anthony Joshua weighed in more than 10 kilos (22 pounds) heavier than the current champion Oleksandr Usyk.
Joshua, a two-time heavyweight champion, weighed 110.9 kilogrammes (244.5 pounds), and Usyk, a Ukrainian, tipped the scales at 100.5 kilogrammes (221.6 pounds), both weights that were comparable to the bout in London last year.
Usyk, 19-0 and the betting favourite after winning by unanimous decision on Joshua's home ground, defied expectations that he had bulked up to match the towering Joshua.
Prior to shaking hands and posing for pictures, the boxers engaged in a 90-second staredown.
“All this stuff, weight, face-off, it doesn’t matter to me. It’s all about the fight,” Joshua said. “I’m just ready for 12 rounds, 100 per cent. Anything shorter than that, it’s a bonus.”

Many commentators have written off Joshua after a hesitant showing against the quick and skillful Usyk at London’s Tottenham Hotspur Stadium last September.

But the 6ft 6ins (1.98m) Watford man, who is striving to become a three-time world champion, has promised to be more “competitive”.

Promoter Eddie Hearn has suggested Joshua will go for the knock-out.

Saturday’s clash will be the 12th consecutive world title fight for Joshua, the 24-2 former Olympic gold-medallist whose other professional defeat was a shock TKO by Andy Ruiz Jr in June 2019.

Joshua avenged that loss six months later in the “Clash of the Dunes” in Diriyah, Saudi Arabia, the first heavyweight world title fight in the conservative kingdom.

Saudi Arabia has invested heavily in sports, including Formula One, Premier League football team Newcastle United and the LIV Golf tour, a controversial rival to the traditional circuits.

The moves have attracted accusations of “sportswashing” from activist groups that say Saudi Arabia is hoping to distract attention from its human rights record.
Chima Ugo is a patriotic Nigerian, a journalist, blogger and singer who is so much interested in the internet, journalism, and blogging and have been for half a decade.