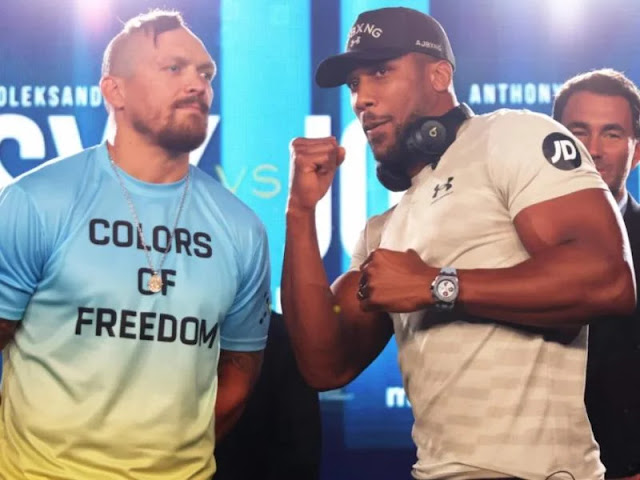 Each of Anthony Joshua and Oleksandr Usyk will receive a minimum guaranteed payment of £33.2 million ($40 million) for their rematch for the world heavyweight championship here.
This is the second-highest reward ever given to a British boxer behind Anthony Joshua's personal record of $60 million for his rematch with Andy Ruiz Jr. in Saudi Arabia, when he successfully defended his WBA, IBF, and WBO titles after suffering his first career loss.
If pay-per-view television sales increase to a level that makes it appropriate to include a bonus for the victor, Joshua or Usyk's weekend windfall might increase to about $50 million.
The fight took place this past Saturday night in the 10,000-seat Arena of Jeddah Sports City, where the Saudis forked over a base price of $80 million.
That includes the acquisition of global broadcasting rights, which Sky Sports have purchased for $25 million for their Box Office channel.

That is likely to make the UK the biggest single source of additional revenue since the DAZN digital streaming platform, which is under-subscribed for boxing, is covering most of the rest of the world.

These numbers will be a temptation for Tyson Fury to recant his retirement once more.

The Gypsy King declared as final his decision to quit the ring on his 34th birthday last week but the WBC have given him until next Friday to think again before they declare their title vacant.

The Saudi Kingdom is expected to raise the ante for a fight for the undisputed world heavyweight title involving the winner of Usyk v Joshua. Perhaps as high as $100 million (£82m) if Fury is the opponent.

Joshua’s promoter Eddie Hearn says: “They want more big events here, especially the undisputed title, and would prefer it to include Fury.”
Chima Ugo is a patriotic Nigerian, a journalist, blogger and singer who is so much interested in the internet, journalism, and blogging and have been for half a decade.