Casemiro ‘excited’ to reunite with Cristiano Ronaldo at Manchester United 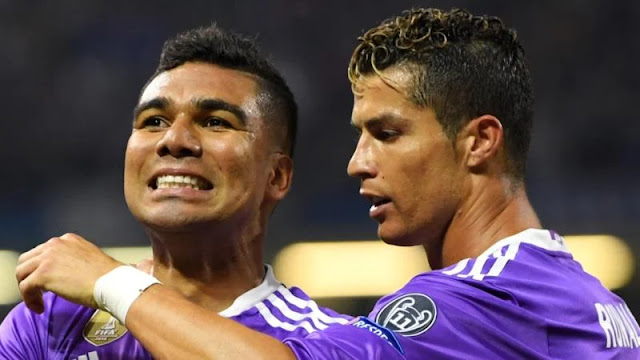 Casemiro is "excited" about the thought of reconnecting with former Real Madrid teammate Cristiano Ronaldo at Manchester United, where the Brazilian is close to completing a £70 million ($83 million) transfer. This move comes after nine brilliant years at the Santiago Bernabeu, which included over 300 appearances and 18 championships.
Many of those titles were shared with Portuguese superstar Cristiano, and Casemiro is hoping that the five-time Ballon d'Or winner will stay at Old Trafford long enough for the pair to enjoy additional triumphs in England.
Questions remain about whether Ronaldo will stay at United beyond the summer transfer window as he pursues a move abroad, but Casemiro is looking forward to working alongside an all-time great again.
"I'm heading to United, one of the biggest teams in the world that fights with the greatness of Madrid," the South American midfielder said at his farewell press conference in Madrid.
“I haven’t talked to Cristiano Ronaldo, but I want to play with him. I’m very excited to work with him. Hopefully he stays. He’s one of the best in the world.”

The 30-year-old Brazil international has been with the Blancos since 2013 but has refuted any suggestion that he is moving on for monetary reasons, with a fresh start merely being sought after achieving more than he could have ever dreamed of in Spain.

Explaining his reasons for severing ties with Real, Casemiro said: “When you make a big decision in your life, it’s always important. After winning the Champions League I told my representative that I thought I was finishing my cycle at Real Madrid. After the holidays I had the same feeling. I’m the happiest in the world and I think history was made.

“I’m looking for new challenges, new goals. To try a different culture and club. I haven’t won anything there and I want to help the team like I did here. I’m full of hope.

“I had that feeling that the cycle was over. The Premier League is a competition that I love and I wanted to play there. I needed a change.

“The people who think I’m leaving for money don’t know me. If it was for money I would have left years ago. The club was good to me and I’m leaving to finish my cycle.”
Chima Ugo is a patriotic Nigerian, a journalist, blogger and singer who is so much interested in the internet, journalism, and blogging and have been for half a decade.