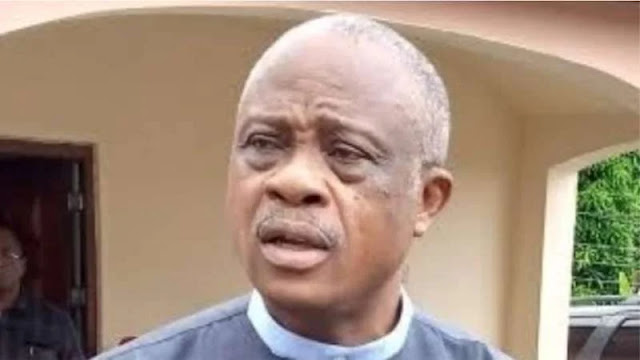 The All Progressives Congress, or APC, has declared that High Chief Ikechi Emenike's selection as its candidate for governor of Abia has opened the door for the party to take office in 2023, according to former minister of labour and productivity Chief Emeka Wogu.
At a gathering of APC stakeholders from the Aba federal constituency that Wogu hosted at his home in Aba on Thursday, he boasted that nothing would now stop the APC from ousting the Peoples Democratic Party, PDP, from the Abia Government House.
As Abians were already yearning for redemption from the abuses of terrible leaders, he claimed that Emenike's ascension to the position of APC governorship candidate came at the right time.
“You have come at a time Abia needs redemption. You came at a time when Abians are not talking about political parties but about the individual who has the capacity to rescue the state and rebuild it,” he told Chief Emenike.

According to the former minister, Abia people have grown tired of governors with apron string of fathers who picked and foisted them on the state with disastrous consequences of underdevelopment and looting of state treasury.

“Emenike represents political independence. I can attest to the fact that he has no godfather,” Wogu said, adding that ” the time has come for Emenike to become the governor of Abia State” irrespective of the antics of detractors and nay sayers.”

He said that the people of Aba federal constituency, comprising Aba North and Aba South local governments were pleased that a man with the right blueprint to solve the peculiar problems of the commercial city of Aba has emerged hence they would work hard to market him to the electorate.

In his response, Emenike told the Aba people that “redemption is near (and) we’ll keep working and marching till we reach Government House in 2023.”

He said that the economic importance of Aba not only to Abia but the the Southeast region, Nigeria and the West Africa cannot not be wished away even though the managers of Aba economy have failed to leverage on the status of the city as centre of production and innovation.

The APC governorship said if Aba is fixed it would have ripple effects on the economies of Nigeria and other countries in the West African subregion that equally enjoyed the booming days of Enyimba city.

“This state must he saved for businesses to grow,” he said, assuring that he would provide the much needed infrastructure and security to bring Aba back to its glory days as centre of commerce and jndustrial hub.

Following requests by the party candidates and other stakeholders for Emenike to make Aba revival a top priority if he becomes the Abia governor, he told them that building roads and paying salaries and pensions are normal functions of government.

He said that it is absurd for a governor to count salary payments and construction of roads as achievements, adding that any governorship candidate that hoped to use these issues as electoral promise should not be considered fit to preside over the affairs of a state.

“Payment of salaries and pensions and building of roads will be sacrosanct in the APC government in Abia come 2023,” Emenike assured.
Chima Ugo is a patriotic Nigerian, a journalist, blogger and singer who is so much interested in the internet, journalism, and blogging and have been for half a decade.