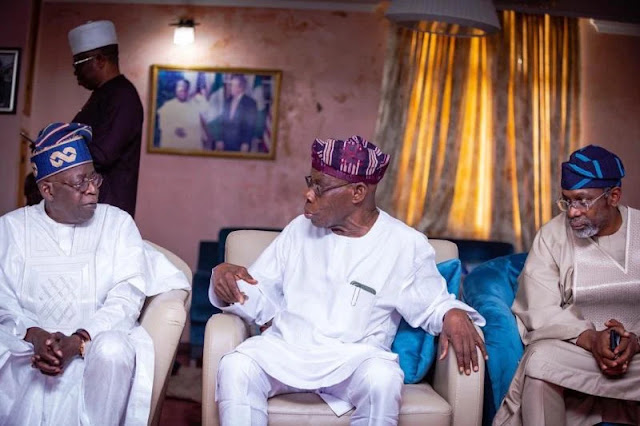 Yesterday, Mr. Femi Gbajabiamila, Speaker of the House of Representatives, revealed what happened during the meeting between former President Olusegun Obasanjo and All Progressives Congress, APC, presidential candidate Bola Tinubu.
According to Mr. Gbajabiamila, the former President pledged Tinubu of victory in 2023 during the meeting.
Although the former governor of Lagos State declined to talk with reporters, specifics of the private meeting were speculated to have some connection to Tinubu's presidential campaign and his desire for Obasanjo's support.
But Gbajabiamila, who spoke during the APC Surulere Local Government Area meeting in Surulere, Lagos, said from what he heard there, Tinubu’s presidency was almost a reality.

The Speaker was present at the closed-door meeting between the two leaders in Abeokuta.

He said: “When we were going to Obasanjo’s house, we were eight, including Asiwaju Tinubu and me; we didn’t want many people to know about the meeting. So, we were to meet Obasanjo and five others from his side.

“But when we eventually got there, we met something pleasantly shocking: a mammoth crowd of our supporters were already at the former president’s house waiting for us.

“So, I, Chief Osoba and Chief Akande and Asiwaju went from our side. My people, what I heard there, what Obasanjo said, the victory of Asiwaju is assured.”

In a statement by the group’s Director of Media and Publicity and the Director General, Mr Abimbola Tooki and Dr Isiaka Owoade respectively, the group said: “As a former governor, he was able to make his mark despite the challenges of insecurity. A crisis is the truest test of a man’s ability and Shettima proved his mettle.

“Serving his people in the Senate, he, Shettima, didn’t disappoint the electorate because he was able to fulfil his key campaign promises. One of the great things for which Senator Shettima would be remembered is the fact that he handed over the State to a competent and a worthy successor in the person of Prof. Babagana Zulum.”