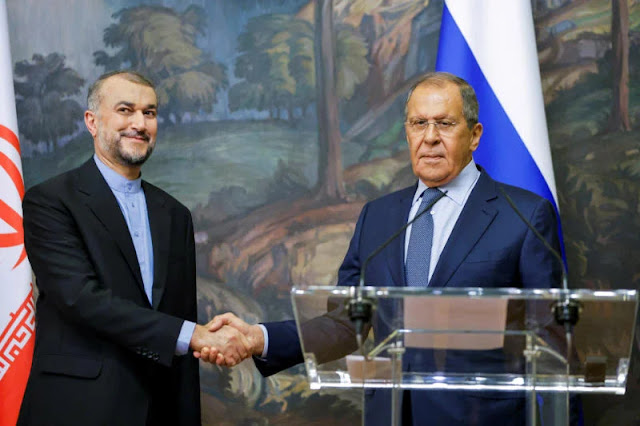 A supposed "peace initiative" for ending the conflict in Ukraine, put up by a European leader, has been transmitted by Iran to Russia.
Hossein Amirabdollahian, the foreign minister of Iran, acknowledged that he had submitted the European plan to Iranian President Ebrahim Raisi while standing next to Sergey Lavrov, the foreign minister of Russia, during a news conference on Wednesday in Moscow.
“There are ideas to help establish peace and stop the fighting in Ukraine, and I shared these ideas with Mr Lavrov,” Amirabdollahian said.

He did not name the European leader behind the initiative or reveal any further details but said the proposal includes points on the Zaporizhzhia nuclear plant and prisoners of war.

Recent shelling around the plant in southeastern Ukraine has spurred fears of a possible nuclear disaster and prompted the International Atomic Energy Agency to deploy experts to visit the site.

Russia and Ukraine have traded blame over the firefights, accusing each other of risking citizens’ safety.

Iran’s semi-official ISNA news website reported earlier on Wednesday that French President Emmanuel Macron was the leader who relayed the message to Tehran, but no officials have commented on the issue.

Mohammad Jamshidi, the political deputy to the Iranian president, tweeted on Wednesday that Amirabdollahian had “a peace initiative and an important message” from “a top western European leader”.

Since Russia’s invasion of Ukraine began on February 24 this year, Iran has relayed messages between Moscow and Kyiv several times, but this is the first publicised instance of Tehran delivering a message from Europe.

The Islamic republic has repeatedly stated that fighting must stop through dialogue and refuses to condemn Moscow. Tehran says NATO expansion is the root of the problem.

Meanwhile, as Western sanctions pile on Russia, Moscow is growing closer to Iran by, among other things, expanding trade, an issue that was stressed by Amirabdollahian and Lavrov on Wednesday.

Russian President Vladimir Putin visited Tehran in July, meeting Raisi and Supreme Leader Ayatollah Ali Khamenei, who told him NATO would have eventually started the Ukraine war had the 69-year-old “not taken the initiative”.

Meanwhile, the United States has for months claimed that Moscow is interested in purchasing Iranian unmanned aerial vehicles (UAVs) in the “hundreds” to use in Ukraine, which Tehran has denied.

The two nations did, however, participate in a military drones tournament hosted by Iran in the central city of Kashan earlier this month.

And while Amir Ali Hajizadeh, the aerospace chief of the Islamic Revolutionary Guard Corps (IRGC), has said Iran is exporting drones, he has not named the destination countries.

Earlier this week, US media outlets cited unnamed American officials as saying Russia has already taken delivery of the first shipment of Iranian drones but has been having technical problems with them.

Tehran and Moscow have not reacted to the latest US claims.

Nuclear deal and the region

The Iranian foreign minister said Tehran continues to review the latest US comments on a “final” European text proposed earlier this month, and still wants guarantees that it will enjoy the economic benefits promised under the deal.

Known formally as the Joint Comprehensive Plan of Action (JCPOA), the deal put curbs on Iran’s nuclear programme in exchange for lifting multilateral sanctions. But the US unilaterally withdrew from the deal in 2018 and imposed sanctions, which prompted Iran to ramp up its nuclear activities while maintaining they are strictly for peaceful purposes.

Raisi had emphasised earlier this week that an International Atomic Energy Agency (IAEA) safeguards probe into traces of man-made nuclear material found years ago on several Iranian nuclear sites must be closed before an agreement to restore the JCPOA can be agreed on.

In addition to bilateral relations, Amirabdollahian and Lavrov said they discussed Afghanistan, Syria, Iraq and Yemen.
Chima Ugo is a patriotic Nigerian, a journalist, blogger and singer who is so much interested in the internet, journalism, and blogging and have been for half a decade.