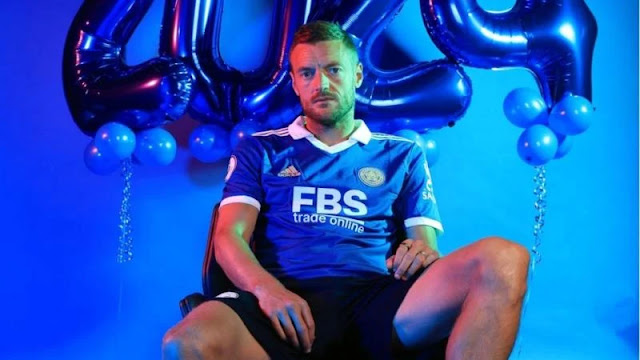 One of Leicester City's all-time best players has reportedly committed to staying with the team. To cement his legacy at the King Power Stadium, Jamie Vardy has agreed to a two-year deal.
One of the top English attackers in recent years will continue to play in the Premier League. For the upcoming two seasons, Vardy will continue to work for Leicester.
The 35-year-old English international has made 387 appearances for the Foxes across all leagues, and his 164 goals place him third all-time among Leicester's top scorers.
With the Foxes, Vardy has won the Premier League, FA Cup, Community Shield, and Championship, and in May 2022, he will mark 10 years with the team.
In comments to the club’s media, Vardy said: “Obviously, I’m over the moon. Once I heard it was something the club was looking at, there was only one thing that was going to happen, and I was going to sign it. The decision was easy.”

“I’ve been here long enough now that I feel like part of the furniture. My legs are still feeling great so I’ll carry on helping the club as much as I can, whether that’s scoring or assisting, that’s what I’m here to do,” he added.

Since he signed for Leicester City from non-league Fleetwood Town back in 2012, Vardy has consolidated himself as one of the top strikers in world football.

He was key to Leicester getting promoted in the 2013-14 season with 16 goals and he played a fundamental role in Leicester securing Premier League survival in the 2014-15 campaign.

When Leicester won that historic Premier League, Vardy scored 24 goals in all competitions and even in 11 games in a row. That broke Ruud van Nistelrooy’s record of 10.